The toolkit is the result of a partnership between the two agencies to promote Colorado Crisis Services, the statewide behavioral health crisis response system offering residents mental health, substance use or emotional crisis support, information and referrals.

END_OF_DOCUMENT_TOKEN_TO_BE_REPLACED

Broomfield, Colo. – The Colorado Department of Agriculture reminds those planning to participate in livestock show and sale activities this season to stay in close contact with state and local health agencies overseeing those events.

Decisions regarding procedures and potential cancelations due to the COVID-19 outbreak are ultimately made by local public health agencies, often with guidance from the state Department of Public Health and Environment and in compliance with state and local public health orders. While the Department of Agriculture has limited regulatory authority within fair, show, and sale operations, the agency does not issue decisions regarding whether or not livestock events will take place.

“Agriculture remains an essential business, and as livestock show and fair season approaches, we will continue to look to the Colorado Department of Public Health and Environment and local health agencies to provide guidance on best practices for gatherings,” said Colorado Commissioner of Agriculture Kate Greenberg. “We strongly encourage people to connect with specific counties and municipalities for clarity and direction about events to be held in those jurisdictions.”

The Department will communicate developments and guidance for sale and show activities as it is released. Information about Colorado’s current local public health orders and variances can be found here.

END_OF_DOCUMENT_TOKEN_TO_BE_REPLACED

May 13, 2020 – Weld County, Colorado – Amid these difficult and challenging times, the Weld County Livestock Association takes great pleasure in announcing the recipients of WCLA college scholarships for the 2020-2021 academic year:

and the Gene Inloes Memorial Scholarship:

Each $1,000 scholarship may be used at any college, university or junior college of the recipients choosing.

WCLA Scholarship Committee member Steve Fiolkoski said, “The 2020 applicants were all deserving and show that agriculture has a bright future with these upcoming leaders!”

END_OF_DOCUMENT_TOKEN_TO_BE_REPLACED

Congratulations to the 2020 Premier Farm Credit Scholarship winners, and a shout out to all of the great students who applied!

This year’s recipients are: END_OF_DOCUMENT_TOKEN_TO_BE_REPLACED

Reitzenstein, a Colorado native, cherishes her childhood on the family farm in Kersey.

“My family has around 250 head of Angus cattle where we strive to meet the needs of seedstock and commercial cattle customers. My brother and I grew up showing cattle and pigs at the county, state and national level as well.” Reitzenstein said.

END_OF_DOCUMENT_TOKEN_TO_BE_REPLACED

Glenrose, TX — The International Texas Longhorn Association (ITLA) will produce their 36th Judges Clinic for the training of professional show judges on May 12 and 19. The detailed training webinar will be available for those desiring the curriculum. It can be viewed on line, world wide with high speed internet in two segments of 3 hours each. 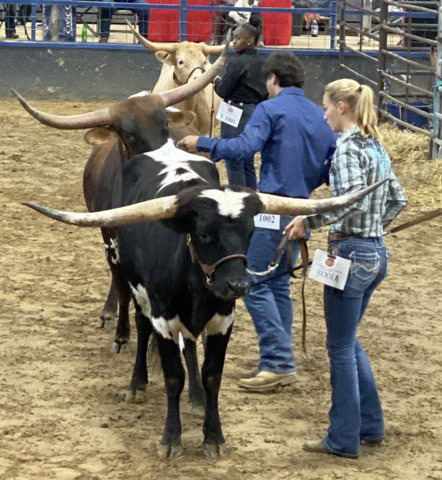 Livestock producers world wide are invited to participate in the ITLA Judges Training Webinar May 12 and 19. Texas Longhorn shows are becoming increasingly popular with some major shows recording the largest entries of any breed.

This will be hosted live by on-line moderator/ presenter Darol Dickinson, Judge John Oliver and Dr. June Cohron. It will include over 300 power point graphics, charts with question and answers, and illustrations from a team of current approved training judges.

END_OF_DOCUMENT_TOKEN_TO_BE_REPLACED

From the comfort of your home or office, watch compelling stories of this year’s Youth in Action award winners, witness the impact of the 4‑H Tech Changemakers partnership with Microsoft, and so much more.

In these challenging times, 4‑H is a resource for you and your family. END_OF_DOCUMENT_TOKEN_TO_BE_REPLACED

DENVER, CO – The 114th National Western Stock Show (NWSS) celebrated sixteen days with 707,922 guests, making it the second highest attended show in Stock Show history. The grand champion attendance record of 726,972 guests was set in 2006 during the 100thAnniversary.
“Thank you to every single stock show fan, exhibitor, family member, contestant and volunteer who joined in the celebration this year,” said Paul Andrews, NWSS President and CEO. “Each person plays an important role, helping us keep the Western tradition alive right here in the heart of Denver.”
END_OF_DOCUMENT_TOKEN_TO_BE_REPLACED

DENVER, CO – The 2020 Auction of Junior Livestock Champions set record numbers again this year. The day began with the Grand and Reserve Champion Steers making an appearance for high tea at the Brown Palace Hotel, which has been a tradition for the last 75 years.
The top eight champion animals set an unprecedented auction total of $531,000. The Grand Champion Steer, named Olaf, sold for an all-time record of $155,000. The Grand Champion Hog sold for an impressive $100,000, and the Reserve Grand Champion Steer sold for $105,000.
The money invested supports these young students who poured countless hours into raising their high caliber animals. Many plan to use the auction funds for their collegiate educations and future in agriculture. A portion of their proceeds support the National Western Scholarship Trust, which funds scholarships in agricultural studies and rural medicine at colleges throughout Colorado and Wyoming. This year, 100 students received funds to aid their education.
The top six Junior Livestock animals were auctioned off live on 9NEWS at 6:30 p.m., and the exciting results are as follows:

END_OF_DOCUMENT_TOKEN_TO_BE_REPLACED

Morgan County is ranked in the top five agricultural counties in the state, and while farmers and ranchers work hard to reuse or recycle products, thousands of pounds of baler twine gets overlooked each year. Polypropylene is the most common material that baler twine is made of, and is a plastic that takes an average of 20-30 years to decompose, and can release toxins if burned.  However, baler twine is 100% recyclable, meaning here is no need to burn, bury, or throw the twine in a landfill when it can be recycled and reused. END_OF_DOCUMENT_TOKEN_TO_BE_REPLACED

Fort Morgan, CO – The deadline for participating in the 83rd year of the National Western Stock Show Catch-a-Calf Contest is fast approaching on December 1st. This long running program is an important part of the National Western Stock Show and is a great opportunity for 4-H members to learn about practical beef cattle management. END_OF_DOCUMENT_TOKEN_TO_BE_REPLACED

Pueblo, Colo. – The Colorado State Fair today released a final tally of 2019 attendance and revenue numbers, detailing increases in both over last year’s State Fair. Visitors to the State Fair increased by roughly five percent, with total attendance recorded at 466,380. Fiesta Day attendance alone was 66,630 – the largest it’s been in over a decade.

Oct. 30, 2019 – As part of ongoing efforts to support 4-H youth nationwide, Tractor Supply Company customers and team members raised $967,681 for the National 4-H Council during this year’s Fall Paper Clover campaign. Because of the campaign’s success, thousands of 4-H youth across the nation will have the opportunity to participate in enriching programs and valuable learning experiences thanks to the dollars raised during the 12-day fundraiser.

“The Paper Clover program gives 4-H youth the opportunity to learn and grow in subjects they are passionate about, and we are thrilled that our fall Paper Clover campaign allowed us to raise $967,681 to benefit our future leaders,” said Phil Reiter, vice president of national and local marketing at Tractor Supply Company. “We are proud to work with customers and team members who are dedicated to serving 4-H clubs.” END_OF_DOCUMENT_TOKEN_TO_BE_REPLACED

(Cheyenne Wells, Colo.) Cheyenne County 4-H members met with the Cheyenne Board of County Commissioners on Tuesday, September 26 to request a proclamation declaring October 6-12 as National 4-H week. Addison Engelbrecht, Tennyson Jackson, Shaylee Scheler, Ty Scheler, and Allison Gekeler ventured into the meeting room to introduce themselves, share 4-H projects taken, and showcase what they are learned in the program.

“I have learned patience and commitment,” Shaylee Scheler said with a confident smile. Other members said they had learned new skills in baking, animal nutrition, time management, and leadership.

The members presented the proclamation and it passed unanimously.

END_OF_DOCUMENT_TOKEN_TO_BE_REPLACED

Oct. 2, 2019 – Tractor Supply Company continues its mission to support youth in their local communities by launching its Fall Paper Clover campaign, a biannual fundraiser in partnership with National 4-H Council to provide scholarships for 4-H members.

The Paper Clover fundraiser provides thousands of dollars each year to offer opportunities for youth to attend conferences, 4-H camps and other developmental programs across the nation. This fall, Tractor Supply is asking for customers to help them reach the $1 million goal by raising awareness of the campaign via social media shares of their paper clover donations with #DonateAMillion. END_OF_DOCUMENT_TOKEN_TO_BE_REPLACED

Cheyenne Wells, Colo. (September 9, 2019) — The anticipation is building for National 4-H Week, during which millions of youth, parents, volunteers and alumni across the country will be celebrating everything 4-H. Cheyenne County 4-H will observe National 4-H Week this year by showcasing the incredible experiences that 4-H offers young people, and will highlight the remarkable 4-H youth in our community who work each day to make a positive impact on those around them.

The theme of this year’s National 4-H Week is Inspire Kids to Do, which highlights how
4-H encourages kids to take part in hands-on learning experiences in areas such as health, science, agriculture and civic engagement. The positive environment provided by 4-H mentors ensures that kids in every county and parish in the country ̶ from urban neighbourhoods to suburban schoolyards to rural farming communities ̶ are encouraged to take on proactive leadership roles and are empowered with the skills to lead in life and career.

“This year we will be taking 4-H members to the commissioners and asking them to declare October 6-12 as National 4-H week. This will be the first 4-H proclamation request in the past few years. I am looking forward to working with the members and commissioners to help connect them. It is important that youth learn how to engage elected officials and understand the policy process,” Colorado State University Extension Agent Lacey Taylor said. Taylor also said 4-H club members were planning to wear clover t-shirts on Wednesday, October 9 to school in an effort to bring more awareness to the 4-H program.