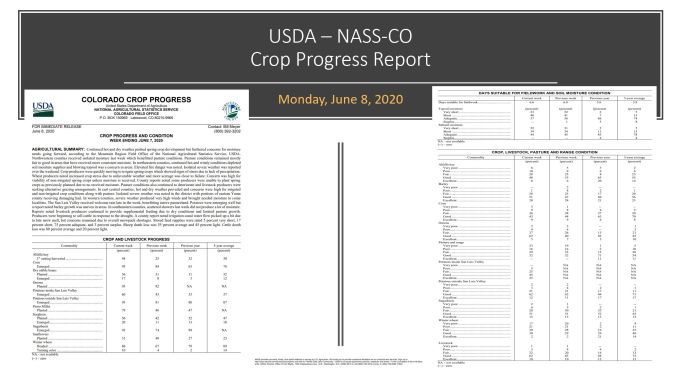 New fund will have gifted $340,000 to support producers statewide by late June

Denver, Colorado – Colorado farmers, ranchers, farmers markets and food hubs are receiving grant funding to help them adjust to COVID-19’s effects on the food supply chain. The new Colorado Farm & Food Systems Respond & Rebuild Fund has already provided more than $140,000 to agricultural producers and intermediaries around the state this spring, and is accepting applications through June 18 for up to $200,000 more in total aid — up to $5,000 each for producers, and up to $15,000 each for farmers markets, food hubs, and other intermediaries that support many producers. A third round of funding is likely later this year. END_OF_DOCUMENT_TOKEN_TO_BE_REPLACED

Potatoes USA: Potato sales at retail see a 9% increase in volume since July 2019

END_OF_DOCUMENT_TOKEN_TO_BE_REPLACED

Western Growers members, which includes all CFVGA grower & allied members, are encouraged to attend to learn more about the Interim COVID-19 Guidance for Agricultural Workers and Employers recently released by the Centers for Disease Control and Prevention (CDC) and the Occupational Safety and Health Administration (OSHA).

END_OF_DOCUMENT_TOKEN_TO_BE_REPLACED

BROOMFIELD, CO – Colorado’s Conservation Districts now have until July 7 to opt in for Coronavirus Relief Funding (CVRF) through the Colorado Department of Local Affairs (DOLA), following a decision by DOLA to extend the application deadline.

END_OF_DOCUMENT_TOKEN_TO_BE_REPLACED

DENVER – Gov. Polis today sent a letter to the Director of the Center for Disease Control and Prevention requesting assistance in ensuring Colorado is prepared to respond during flu season, and can prevent the combined impact of flu and COVID-19 from overwhelming the health care system.

“One of the most significant threats to our continued progress is flu season.  My administration has been working diligently to increase our vaccination rates. But we need to do even more this coming flu season especially among older Coloradans and our vulnerable residents, to reduce the number of flu victims in need of hospitalization and free up those beds for COVID patients if needed. This is where we need your help,” the letter reads.

“Flu season is going to tax our PPE supplies as those giving vaccinations are going to need medical grade masks, perhaps shields and gloves to ensure they are protected from COVID-19. While we have much better access to PPE than we did, we are going to need help obtaining more,” the letter continues.

The BARN – BRIGGSDALE, CO – June 8, 2020 – World Food Safety Day, which was celebrated on June 7, which was created by the World Health Organization (WHO) to draw attention and inspire action to help prevent, detect and manage food borne risks, and other challenges impacting global food safety. With that in mind, joining the Colorado Ag News Network and FarmCast Radio via ZOOM is Suzanne Livingston, Director of the IBM Food Trust Network, in to discuss how technology is improving food safety for businesses and consumers around the world. Suzanne will also explain how blockchain technology works in the supply chain, and it means for consumers, and what types of foods are being traced and vetted with this technology….

DENVER, CO – June 8, 2020 – April proved to be a relatively strong month for U.S. beef and pork exports despite COVID-19 related interruptions in production and economic headwinds in some key markets. Beef exports were below last April’s large totals but still topped $600 million in value. Pork exports remained well above year-ago levels but slowed from the record pace established in the first quarter. The U.S. Meat Export Federation’s (USMEF) complete summary of the April results is available online.

USMEF President and CEO Dan Halstrom notes that Japan is a major bright spot for U.S. beef and pork exports in 2020, due in part to tariff relief delivered by the U.S.-Japan Trade Agreement that entered into force Jan. 1. With its domestic pork production slowed by African swine fever, China continues to show very strong demand for U.S. pork and U.S. beef is also beginning to capitalize on the U.S.-China Phase One Economic and Trade Agreement. The red meat trade provisions of that agreement were implemented in late March.

While Halstrom expects global demand for U.S. red meat to remain strong this year, he cautioned that temporary supply disruptions will likely impact May and June results. He also notes that weakened currencies in Mexico and some other Latin American markets have slowed U.S. exports, as well as COVID-19 related restrictions on consumers and businesses in these countries.

END_OF_DOCUMENT_TOKEN_TO_BE_REPLACED

The World Dairy Expo will not take place in 2020, the first time it’s been canceled in 53 years. The World Dairy Expo Committee made a difficult decision based on public health orders and restrictions related to COVID-19 that are in place and issued by Public Health in Madison and Dane County, Wisconsin. World Dairy Expo was to take place in Madison from September 29 through October third. Last year, the event hosted more than 62,000 people from almost 100 countries. “Our collective hearts are heavy as we share with you that the World Dairy Expo 2020 has been canceled,” says WDE General Manager Scott Bentley. “We know how much this hurts because we feel it too. Please know that other options were explored and considered by the World Dairy Expo Executive Committee and staff.” Public health officials in Dane County, Wisconsin, anticipate that access to the Expo would be limited to 250 people at outdoor events come late September and early October. “We recognize our responsibility to maintain the health of our community and the safety of all of you as exhibitors, attendees, as well as volunteers,” Bentley adds.

The Justice Department has made a formal demand for information from the country’s four biggest meatpackers as they investigate potential antitrust violations. A Bloomberg article says that deepens the scrutiny of an industry that’s already been hit hard by plant shutdowns due to the coronavirus. The department’s antitrust division sent civil investigative demands, which are similar to subpoenas, to the companies. The Justice Department is also talking with state attorneys general about the probe after a group of states called for an official investigation. The four meatpackers that control more than 80 percent of the U.S. beef processing market include Tyson Foods, JBS, Cargill, and National Beef Incorporated. Their dominance in the industry has sparked concerns about their pricing power over livestock suppliers for years. Bloomberg says three of the companies didn’t immediately respond to a request for comment. National Beef, based in Kansas City, Missouri, confirmed they did get the civil investigative demand from the Justice Department, but they noted that ”The request is very narrow in scope, which leads us to believe that the DOJ doesn’t necessarily believe there is an antitrust issue.” The Justice Department subpoenas to meatpackers follow criminal charges last week against four current and former executives of chicken processing companies.

Less Than a Month Before USMCA Goes into Effect

So, where do things stand on the U.S.-Mexico-Canada Trade Agreement as it goes into effect in less than a month? Politico says North American leaders are selling USMCA as a big win that will remove uncertainty in the region. However, there are still some agricultural issues between the U.S. and Mexico that have to be worked out yet. Kenneth Smith Ramos, Mexico’s former chief USMCA negotiator, says Southern U.S. growers and U.S. Trade Representative Robert Lighthizer are still talking through seasonal produce concerns. Seasonal produce growers mainly located in Florida and Georgia have pushed for special provisions in USMCA that would allow them to more easily petition for anti-dumping or countervailing duties on Mexico, but that was left out of the final agreement. Still, they’re pushing for rules that would allow them to fight Mexican growers. In the meantime, Mexican officials are still concerned about talk of the U.S. doing more border inspections. Mexico agreed to increased border inspections as part of a tomato suspension agreement, but now there’s a push to extend that to other agricultural goods entering the United States.

The National Cattlemen’s Beef Association applauded the introduction of the bipartisan, bicameral PASTURE Act of 2020. PASTURE stands for Pandemic Authority Suitable To Utilize Easements. The Bill was introduced in the House by Kansas Republican Roger Marshall and Minnesota Democrat Angie Craig. Companion legislation in the Senate was introduced by South Dakota Republican John Thune and Minnesota Democrat Tina Smith. “Yesterday’s introduction of the PASTURE Act is a welcome step toward providing grazing flexibility to livestock producers during the COVID-19 pandemic,” says Ethan Lane, the NCBA Vice President of Government Affairs. “As farmers and ranchers are keeping and feeding livestock for longer periods of time, Congress must ensure that producers do not face a forage shortage. Emergency haying and grazing of Conservation Reserve Program Acreage is a relied-upon practice for livestock and forage management.” The PASTURE Act gives USDA the ability to open up CRP acreage for emergency haying and grazing during the COVID-19 pandemic. Back in mid-May, NCBA and 35 state affiliates sent a letter to Congress urging them to take action on this issue.

The U.S. Reaches an Organic Equivalence Agreement with Taiwan

The quickly-growing organic market in Taiwan is poised to grow even faster. Late last week, the U.S. and Taiwan reached an organic equivalence arrangement to enable increased trade between the two regions. Taiwan is already the fifth-largest export market for U.S. organic products. The new arrangement will remove previous barriers for exporters, providing an opportunity for U.S. organic products to gain a greater share in the Taiwanese marketplace. Taiwan’s imports of U.S. organic products have increased sharply in the past few years, with imports totaling over $90 million last year, and are forecast to grow by just about 50 percent over the next five years. “We are pleased to see the enthusiasm from both the U.S. and Taiwanese governments to reduce trade barriers for organic products and ensure more consumers have access to the wide variety of high-quality organic goods the U.S. can provide,” says Laura Batcha (BATCH-ah), Executive Director and CEO with the Organic Trade Association. Taiwan imports multiple organic products from the U.S., including apples, lettuce, grapes, cauliflower, celery, and processed products. The OTA says they’ll provide resources and activities for exporters who wish to explore potential business opportunities with Taiwan.

The agriculture industry would be able to take part in an expanding carbon credit market thanks to bipartisan legislation introduced last week. A report in The Hill Dot Com says the goal of the legislation would be to provide money to farmers for using sustainable farming practices. Farming is a source of carbon emissions, but it also presents vast opportunities to sequester carbon in both the soil and plants. The legislation would require the USDA to create a certification program to help farmers and landowners in implementing protocols and monetizing the climate value of their sustainable practices. “As Americans, we have the ability to come up with climate solutions that can benefit our economy and our way of life,” says South Carolina Republican Senator Lindsey Graham, who co-sponsored the bill. “This legislation is an opportunity to put our knowledge and can-do spirit to work to promote business opportunities for the agriculture industry while promoting the protection of our environment.” The bill has the support of environmental and farm groups, along with numerous corporations like McDonald’s and Microsoft, both of which have promised they will reduce their carbon footprints.