April 29, 2020 – Predicting grassland production is a major challenge for ranchers and other land managers with grazing livestock. This productivity is key each spring when these ranchers and managers are trying to decide how many cattle to turn out to pasture, how long to graze an area or where forage might be abundant.

An online tool – first created by Colorado State University researchers and designed to help make such decisions – is available again this spring. Known as the Grassland Productivity Forecast or Grass-Cast, the tool was developed in 2017 by scientists at the USDA Agricultural Research Service, with other federal agencies and several universities.

Forecasting tool designed for and with ranchers, land managers

Grass-Cast was originally designed for ranchers and grassland managers in the Northern Plains and was expanded in 2019 to cover the Southern Plains. New features this year include expanded territory, including most of New Mexico and Arizona, and forecasts for individual 6-mile x 6-mile areas, rather than the county-by-county results available in previous years. 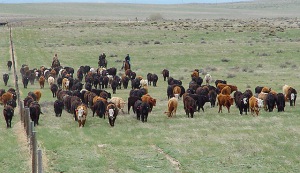 A large herd of cattle moves to a new pasture for grazing at the ARS Central Plains Experimental Range LTAR site in Colorado. Photo: Matt Mortenson/USDA

William Parton, professor emeritus and a senior research scientist at the Natural Resource Ecology Lab at CSU, said the project is truly a collaborative effort.

He and Melannie Hartman, senior research associate at NREL, initially posted an early version of Grass-Cast online before connecting with USDA researchers, who received feedback from ranchers on what would be most useful for them.

“The impact of precipitation or prolonged dryness on the forecast depends on cumulative effects of soil moisture over the growing season and the timing of the event,” she said. “If an area has been dry, Grass-Cast predicts if grassland production can reach normal levels with enough precipitation or not.”

Dannele Peck, an agricultural economist who oversees Grass-Cast as director of the USDA Northern Plains Climate Hub, said the tool has become increasingly popular with ranchers and other land managers.

During the 2019 season, the Grass-Cast website was visited nearly 3,000 times by over 1,800 different users. “Still, we are always looking for ways to make it more useful, so we welcome any suggestions,” Peck added.

Grass-Cast uses over 30 years of historical data about weather and vegetation growth, combined with seasonal precipitation forecasts, to indicate whether grasslands are likely to produce above-normal, near-normal or below-normal amounts of vegetation.

The first Grass-Cast maps for the 2020 season were released in mid-April and will be updated every two weeks until the end of August to incorporate newly observed weather data. Grass-Cast becomes more accurate as the growing season progresses, according to Peck.

Land managers typically start paying close attention to the forecasts in May and June, when the risk of drought might prompt them to sell yearlings or older cows, wean calves early, buy feed or move livestock to areas where grass is more plentiful.

Grass-Cast does have some limitations. The tool cannot differentiate between desirable and undesirable forage species, so land managers need to know what proportion of their pastures are weedy, and how those weeds will respond to rain, or a lack of it. They should also combine the forecasts with their knowledge of local soils, plant communities, topography, management history and other conditions that affect vulnerability to drought, Peck says.

Parton, Hartman and other scientists involved in Grass-Cast published a study last fall in Ecosphere outlining the scientific basis for the online tool. In the study, the team evaluated major environmental controls on plant production for grasslands in the Great Plains.

This story was adapted from a release developed by the Agricultural Research Service, the U.S. Department of Agriculture’s chief scientific in-house research agency.