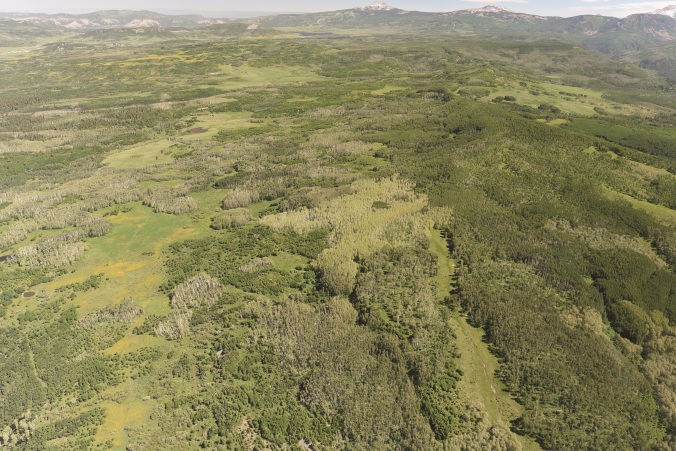 FORT COLLINS, Colo. – March 9, 2020 – The Colorado State Forest Service presented its annual forest health report to legislators at the State Capitol today, highlighting the current conditions of forests across Colorado and how the agency is improving the health of the state’s forests.

“With field offices across the state, we are proud to live and work alongside so many great partners and community members to improve the health of our forests,” said Mike Lester, state forester and director of the CSFS. “Together, we are protecting the many values our forests provide, from clean air and water to local jobs in the wood products industry to places to recreate outdoors. By taking a regional look at forest conditions, we can give those folks a more localized assessment of what’s happening to their trees.”

The latest RMFU LegisLetter for CO

END_OF_DOCUMENT_TOKEN_TO_BE_REPLACED

Given in honor of renowned conservationist Aldo Leopold, the award recognizes ranchers, farmers, and foresters who inspire others with their dedication to land, water, and wildlife habitat management on private, working lands.

END_OF_DOCUMENT_TOKEN_TO_BE_REPLACED

Inside the BARN with NestFresh’s Louise Howe

Check out a Couple of NestFresh Recipes – LOOK BELOW END_OF_DOCUMENT_TOKEN_TO_BE_REPLACED

At the National Pork Industry Forum, USDA Undersecretary for Marketing and Regulatory Programs Greg Ibach (EYE-baw) announced an African Swine Fever Action Plan is in place should the disease be detected in the U.S. pork herds. So far, the U.S. is free of the ASF virus and prevention remains the number one priority for the National Pork Producers Council. According to the plan, Ag Secretary Sonny Perdue would immediately declare an “extraordinary emergency” if ASF is detected in the U.S. By doing that, the USDA would be established as the leader of a national, coordinated response to control and eradicate the swine disease. It would also ensure the availability of funding and other resources to manage the response. Other plan elements include a national stop-movement of pig’s order of at least 72 hours, depopulation efforts aligned with guidance from the American Veterinary Medical Association, support for carcass disposal, and payments for virus elimination based on the size of affected premises. The NPPC remains committed to working with the USDA and Customs and Border Protection to keep ASF out of the United States.

Beijing recently made U.S. poultry shipments eligible for exemptions from extra tariffs and poultry shipments to China are on the rise. A Reuters article points out that the additional tariff relief may give China a greater ability to follow through on promises to buy significantly more American agricultural goods as part of the Phase One trade deal. U.S. chicken producer Tyson Foods says its chicken shipments are already rising as a result. China had said last month it would grant exemptions on retaliatory duties to 696 U.S. goods as part of its efforts to ease the trade war between the two largest economies in the world. Jim Sumner, President of the USA Poultry and Egg Export Council, says U.S. poultry wasn’t eligible for the exemptions until last week. “We’re now getting the product into the country without any retaliatory tariffs,” Sumner says. Global meat and poultry suppliers are competing for sales to China, where an African Swine Fever outbreak has trimmed the hog herd by more than 40 percent, raising the need for protein imports. Beijing removed an almost five-year ban on U.S. poultry imports in November, which U.S. Trade Representative Robert Lighthizer says would mean an additional $1 billion in shipments to China every year. “We’re now on a level playing field with other poultry suppliers to China,” Sumner adds.

The National Council of Farmer Cooperatives is optimistic that Internal Revenue Service officials will adjust the Section 199A tax break, thanks to testimony from the Treasury Secretary. For more than two years, farmer cooperatives have been working to re-implement a tax deduction comparable to what they received before the 2017 tax law was passed. Last summer, the Treasury Department proposed rules that would limit the Section 199A deduction to patronage income. However, the Treasury rule would then eliminate cooperatives’ ability to combine “non-patronage income” as part of the calculations for the tax deduction. The tax challenge came to light in early 2018 after it had first appeared the 2017 tax law would make it much more lucrative for farmers to sell grain to farmer cooperatives rather than to private grain companies. Congress fixed the provision, but the Treasury Department has been bogged down since then trying to complete a rule that would go along with the tax fix. Because of the complex agreement that Congress passed, cooperatives got a special break under Section 199A because they couldn’t take advantage of the new lower corporate rates. The final deal was supposed to then reinstate a tax break that cooperatives had been using before the 2017 tax law.

The 2020 Commodity Classic set a record for the number of farmers attending the event. The total number of farmers who registered for the event was 4,678, the highest number in the show’s 24-year history. That was 83 more farmers than the previous record of 4,595 set in New Orleans during the 2016 Classic. The 9,350 total registrations were second only to the 2016 event in New Orleans. The 2020 Commodity Classic, set in San Antonio, Texas, was jam-packed with dozens of educational sessions, a huge trade show that featured almost 400 exhibitors, a keynote address by Ag Secretary Sonny Perdue, as well as policy meetings of the sponsoring commodity organizations. The Commodity Classic will celebrate its silver anniversary as it makes a return to San Antonio, March 4-6, 2021. The Classic was first established in 1996 and is America’s largest farmer-led, farmer-focused educational and agricultural experience. The Commodity Classic is presented every year by the American Soybean Association, National Corn Growers Association, National Association of Wheat Growers, National Sorghum Producers, and the Association of Equipment Manufacturers.

The National Pork Producers Council elected new officers and board members during the National Pork Industry Forum in Kansas City. Howard Roth, a pig farmer from Wisconsin, was elected as the new NPPC president. He’s a fifth-generation farmer who owns Roth Feeder Pigs. In addition to serving on the NPPC board for eight years, he previously was a member of the Wisconsin Pork Association board of directors and is currently the chair of the association’s Swine Health Committee. Roth takes over from David Herring, a North Carolina farmer who now becomes the NPPC immediate past president and chair of the council’s trade and nominating committees. Jen Sorenson is the new NPPC president-elect. For the past nine years, she’s been with Iowa Select Farms, a business that markets more than five million hogs per year. Sorenson was previously the communications director for the Iowa Pork Producers. Terry Wolters of Pipestone, Minnesota, is the new NPPC Vice President. He’s involved in the Minnesota and South Dakota Pork Producers groups, the Pipestone County Pork Producers, the National Pork Board, and chairs the Animal Health Food Security Policy Committee.

Farmers and ranchers can start applying to enroll grasslands in the Conservation Reserve Program Grasslands signup on March 16. “This CRP Grasslands signup allows farmers and ranchers to protect grasslands, rangelands, and pastures, while they maintain the land as working grazing lands,” says Farm Service Agency Administrator Richard Fordyce. “The program emphasizes support for grazing operations and plant and animal biodiversity while protecting land under the greatest threat of conversion or development.” CRP Grasslands participants retain the right to conduct common grazing practices like haying, mowing, or harvesting seed from the enrolled land. The timing of some activities may be restricted by the primary nesting season of birds. Participants will receive an annual rental payment and may receive up to 50 percent cost-share for establishing approved conservation practices. The duration of a CRP contract is either 10 or 15 years. Signup will run through May 15. CRP marks its 35th anniversary in 2020 with 22 million acres currently enrolled in the program.