How bureaucrats and outside interests use wolf introduction to accomplish their agenda
By Jim Beers – Retired U.S. Fish and Wildlife Biologist

Jim Beers is a retired US Fish & Wildlife Biologist that has worked in many domestic and foreign locations including Washington, DC, and as an employee of a western state wildlife agency.

Jim became a whistleblower in the mid 1990’s when he testified before Congress about the theft of $45 to 60 Million dollars from state wildlife agencies by federal bureaucrats to introduce wolves.

He has written and spoken across the Lower 48 States for over 20 years (since retirement) on federal environmental laws being used to affect numerous hidden agendas concocted by Non-Government Organizations and bureaucrat’s self-interests. 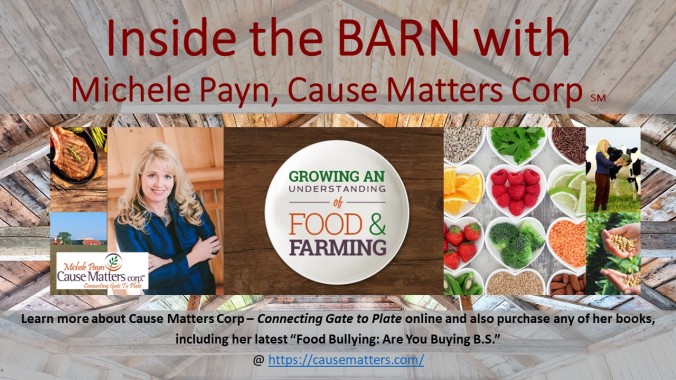 Inside The BARN with Michele Payn, Cause Matters Corp discussing her latest Book, “Food Bullying” and much more…

BRIGGSDALE, CO November 6, 2019 – Michele Payn, of Cause Matters Corp, who is a professional speaker and best-selling & award winning author, joins the Colorado Ag News Network and FarmCast Radio to discuss her most recent book , Food Bullying: Are You Buying B.S.” and much more including:

NOVEMBER 6, 2019 – A pig or a cow can’t tell someone when its injured or in pain, but researchers are identifying ways to measure not only when an animal is in pain, but also what measures can be taken to help alleviate that pain. Abbie Viscardi, a research assistant professor in the anatomy and physiology department at Kansas State University, focuses primarily on validating non-invasive tools for pain assessment and pain alleviation of food animals on-farm to improve animal welfare. She shared her work at the 2019 U.S. Animal Health Association annual meeting, held last week in Providence, R.I.

END_OF_DOCUMENT_TOKEN_TO_BE_REPLACED

Potatoes USA: Retail Sales Of Potatoes Up in Q1 of MY20

END_OF_DOCUMENT_TOKEN_TO_BE_REPLACED

DES MOINES, IOWA – Nov. 6, 2019 – A new report from the National Pork Board digs into the growing short- and long-term protein needs facing China and how U.S. pork can position itself to meet that demand. The new report, Pork 2040: China Market Assessment, also reveals the impact that African swine fever (ASF) is having on both China’s short- and long-term protein needs and how the Chinese pork industry and supply chain will change as a result.

The research study was conducted by Gira, a global research firm, using Pork Checkoff dollars and funds from the U.S. Department of Agriculture Foreign Agricultural Services Emerging Markets Program (EMP). It outlines critical insights that exporters of U.S. pork can use now to position themselves for long-term success in the Chinese market.

“Pork is a critical part of the Chinese diet with per capita consumption nearing 88 pounds* per person per year,” said Norman Bessac, vice president of international marketing for the Checkoff. “This report will help exporters position U.S. pork as the supplier of choice, thereby building value for all U.S. pork producers.” END_OF_DOCUMENT_TOKEN_TO_BE_REPLACED

NEW ORLEANS, LA – National Milk Producers Federation President and CEO Jim Mulhern highlighted the resilience of U.S. dairy farmers in a challenging economic and policy environment, pledging that dairy would speak with one voice on crucial issues in remarks at NMPF’s joint annual meeting with the United Dairy Industry Association and the National Dairy Promotion and Research Board.
“Resilience against hardship has always been a fact of life in dairy,” Mulhern said. “We know that if we embrace change while holding true to our values, we will win.”
NMPF’s portion of the conference was highlighted by bylaws changes that bolster its position as the premier organization for U.S. dairy farmers. The biggest U.S. dairy-farmer group also honored longtime leaders who have helped build today’s industry.
At its annual meeting in New Orleans, the organization added the chairman of its Small Cooperative Caucus, Jimmy Kerr of Cooperative Milk Producers Association based in Blackstone, Virginia, to its now 15-member Executive Committee, ensuring that cooperatives of all sizes have a voice in the organization’s thought-leadership body. The Executive Committee, that was formed earlier this year, enhances the geographic and size diversity the organization needs in its governance structure.

END_OF_DOCUMENT_TOKEN_TO_BE_REPLACED

Report from U.S. Farmers & Ranchers Alliance Aims For Greater Collaboration in Food Value Chain
Chesterfield, Mo. (November 6, 2019) – A new report from the U.S. Farmers & Ranchers Alliance (USFRA) finds that farmers, ranchers and food companies all have a great deal at stake when it comes to food metrics reporting, but much work needs to be done to co-create a data collection and reporting system that works for everyone.
“The ultimate goal is to ensure the resiliency of our food and agriculture supply chain in the 21st century,” said Erin Fitzgerald, CEO, USFRA. “We can’t make progress toward this grand challenge without coordinated metrics that work on the farm and up the supply chain.”

END_OF_DOCUMENT_TOKEN_TO_BE_REPLACED

Broomfield, Colo. – Colorado’s famous peaches, sweet corn, chiles and melons, and an abundance of other specialty crops will benefit from grants totaling more than $745,000 through the Colorado Department of Agriculture’s 2019 Specialty Crops Program.

Specialty crops include fruits and vegetables, tree nuts, dried fruits, horticulture, and nursery and greenhouse and sod. Every state receives funds from the U.S. Department of Agriculture’s (USDA) Specialty Crop Block Grant Program, with the aim of enhancing the competitiveness of specialty crops.

“We are especially pleased to be funding four iconic crops this year, as well as sod and greenhouse which are a huge share of our specialty crop market,” said Glenda Mostek, grants specialist. “These grants will fund projects all over the state, from the Western Slope to the Arkansas and San Luis Valleys, and benefit many of our farmers.”

The Colorado Cider Guild received its first-ever grant this year. “We are excited to receive a specialty crop grant to further the cooperative relationship between current and future apple growers and dedicated Colorado cider producers,” said Brad Page, President of the Guild. “We look forward to seeing many cider apples grown in Colorado in the coming years.”

The following projects will begin late this fall or early next spring:

END_OF_DOCUMENT_TOKEN_TO_BE_REPLACED 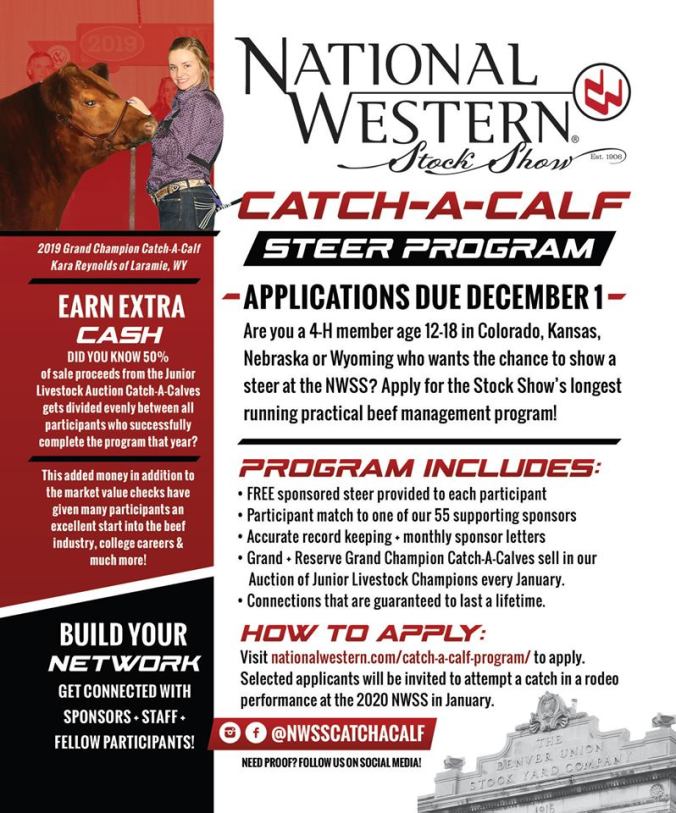 The October Ag Economy Barometer improved to a reading of 136 in October, up 15 points compared to September. The monthly measure of the farm economy saw an increase in the assessment of current and future conditions by farmers. The Current Conditions Index rose from 100 in September to 115 in October, and the Futures Expectations Index also rose 15 points to a reading of 146. The results are based upon a nationwide telephone survey of 400 U.S. crop and livestock producers. Organizers say farmers in October were more inclined to think now is a good time to make large investments in their farming operations, and more farmers said they expect farmland values to rise, than in September. Although three-fourths of farmers in this month’s survey said they expect the soybean trade dispute with China to be resolved favorably to U.S. agriculture, 62 percent of producers said they expect to receive another round of trade aid payments for the 2020 crop year.

China wants the United States to commit to lifting tariffs to reach a phase one trade agreement. The South China Morning Post reports Beijing needs America to be more responsive to its concerns, if it wants Chinese President Xi Jinping (Shee Jihn’-ping) to visit the U.S. to sign the deal. There’s been no firm commitment by the U.S. to delay a December round of tariffs, and China also appears to want the U.S. to lift its recent round of tariffs from September. China says that without a move by President Donald Trump to make a “solid commitment” towards removing tariffs, scheduling a visit to the U.S. to sign the agreement “would be politically difficult.” U.S. officials have suggested they meet in Alaska, Iowa or Hawaii to sign the agreement. The two sides originally planned to sign the agreement on the sidelines of a now-canceled meeting in Chile. Sources close to the China talks say China fears it may have made too many concessions in the agreement.

A new grain price outlook underlines continuing long-term challenges for U.S. farmers. Rabo AgriFinance just released its ten-year outlook for corn, soybeans and wheat. The report says ending stocks will continue to be an issue for the crops, as the long-term trends for yield increases make up the difference in lower acre numbers while demand remains flat. The report says these stocks will keep a lid on commodity prices. Even if the U.S. and Chinese government’s resolve their trade dispute, Rabo expects soybean demand to drag due to the lingering effects of African swine fever, namely slow or limited sow herd rebuilding in China and Southeast Asia. The analysis shows a 75 percent probability that soybean prices will remain under $9.60 per bushel. For corn and wheat, the report says, “oversupply, flat domestic use, no or little growth in exports, and increased global trade competition” continue to pile up. Given no changes to ethanol policy, the outlooks call for animal feed to overtake ethanol as the demand driver for corn in 2026/27.

A recent letter to Agriculture Secretary Sonny Perdue says the current Market Facilitation Program creates “winners and losers among neighbors.” The Letter by House Agriculture Committee Chairman Collin Peterson urges the Department of Agriculture to strongly consider a list of concerns in issuing the next round of payments under the program. Peterson says acres not certified or enrolled in farm programs in 2018 are not eligible for the program, which is problematic for farms that recently changed hands where the previous owner didn’t participate in farm programs. Additionally, Peterson says crop rotations have prevented farmers from receiving payments, and the payments don’t account for the impact on crop basis created by trade disruptions. Regarding the MFP dairy program, Peterson says farmers have many questions about why their payments were based on established farm program production history, and not actual production. Peterson says he “stands ready to work with the administration” on long term fixes to the commodity safety net.

Senator Tammy Baldwin this week announced increased mental health funding for farmers. The Wisconsin Democrat’s Facilitating Accessible Resources for Mental health and Encouraging Rural Solutions for Immediate Response to Stressful Times, or FARMERS FIRST Act, provides funding for local mental health resources. The bill was included in the 2018 farm bill, passed last year. Baldwin worked to pass an amendment last week to a Senate appropriations bill that will provide $8 million, an increase of $6 million from Fiscal Year 2019, for the bipartisan legislation. Baldwin says, “farmers are facing many difficult challenges and we all need to work together to provide them the support they need.” Reports from the Centers for Disease Control and Prevention have found that farmers and other individuals who work in agriculture experience a high rate of suicide. The increased funding will help expand access to stress reduction strategies and suicide prevention programs for people who work in agriculture.

A broad coalition of biofuel and farm advocates this week sent a letter to the White House calling on President Donald Trump to fix a flawed proposal from the Environmental Protection Agency. The EPA proposal on biofuels, according to the coalition, “fails in its mission to reinvigorate farm economies and reopen biofuel plants across America’s heartland.” The letter was signed by 60 organizations, including the Renewable Fuels Association. It notes that the EPA’s draft plan undermines the administration’s commitment to restore integrity to the Renewable Fuel Standard and accurately account for biofuel demand destroyed by small refinery exemptions. The groups state that the flawed proposal “swaps out a critical component of the SRE remedy sought by farmers and,” and instead proposes to recover only those gallons previously recommended for exemption by the U.S. Department of Energy. The National Corn Growers Association says to the President, “The proposal – as written – will not provide the relief we believe you are seeking.”