“Growing up on the Eastern Plains and working in my family’s farm implement dealership gave me a deep appreciation for agriculture and the organizations that work every day to help the industry thrive,” said Senator Gardner. “Since coming to Washington, I’ve been proud to work closely with the Farm Bureau to support Colorado’s agriculture industry and our farming communities, and I’ve been fortunate to have the Farm Bureau join me every year on my annual Colorado Farm Tour. Congratulations to the Colorado Farm Bureau on 100 years of being a strong voice for farmers, ranchers, and rural communities in the Centennial State.”

“Congratulations to the Colorado Farm Bureau for a century of important work to protect and advance our state’s rich farming and ranching tradition,” said Senator Bennet. “As a member of the Senate Agriculture Committee, I’ll continue to partner with the Colorado Farm Bureau to ensure the 2018 Farm Bill is fully implemented and expand opportunities for the next generation of farmers and ranchers. I look forward to seeing what they will accomplish for the agriculture community and rural Colorado in the next 100 years.”

“The members of Colorado Farm Bureau are happy to have the organization’s 100th anniversary be recognized by Senator Gardner and Senator Bennet,” said Don Shawcroft, President of the Colorado Farm Bureau. “Recognition on the floor of the United States Senate is a fitting tribute to the contributions of the state’s largest agriculture organization and its 100 years of work on behalf of the industry and Colorado’s Rural Way of Life.” 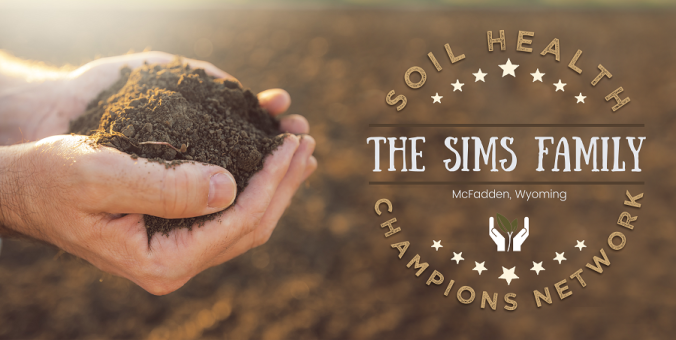 WASHINGTON D.C. – November 5, 2019 – The Sims Family owns and operates the Sims Cattle Company on a 26,000-acre ranch in McFadden, Wyo. The family operation includes Scott and April Sims, their daughter Kendra, their son Shanon and his wife Melinda, as well as their grandkids Kagan and Jentry. Former NACD President Olin Sims, Scott’s brother, was also a part of the family business up until he passed away in 2007. END_OF_DOCUMENT_TOKEN_TO_BE_REPLACED

WASHINGTON D.C. – November 5, 2019 – Last week, the Bureau of Land Management’s (BLM) National Wild Horse and Burro Advisory Board met in Washington, D.C., to discuss the ongoing degradation of the nation’s western rangelands caused by the overpopulation of free-roaming wild horses and burros.

Over the course of the two-day meeting, the board received updates from BLM and the U.S. Forest Service. The board was briefed on BLM’s use of advertising on social media for potential adopters of wild horses and burros, the online corral and the internal monitoring system the BLM uses once a wild horse or burro is adopted. END_OF_DOCUMENT_TOKEN_TO_BE_REPLACED

ARLINGTON, Va. – U.S. dairy farmers have been through challenging times, but there is light ahead if the sector proactively engages with the challenges of trade, the environment, climate and consumer tastes, said Randy Mooney, a Missouri dairy farmer and chairman of the National Milk Producers Federation. Mooney spoke this morning at the organization’s annual meeting, this in New Orleans.

“Dairy farmers play an important role in society. We help preserve communities,” he said. “Like all of you, I’m proud to be a dairy farmer, producing the most nutritious product in the world.”

END_OF_DOCUMENT_TOKEN_TO_BE_REPLACED

No-Till November is here! In its third year, this campaign created by the Natural Resources Conservation Service (NRCS) aims to promote healthy soil management practices by encouraging farmers to avoid tilling or plowing their fields this fall and keeping unharvested plants in the ground.

END_OF_DOCUMENT_TOKEN_TO_BE_REPLACED 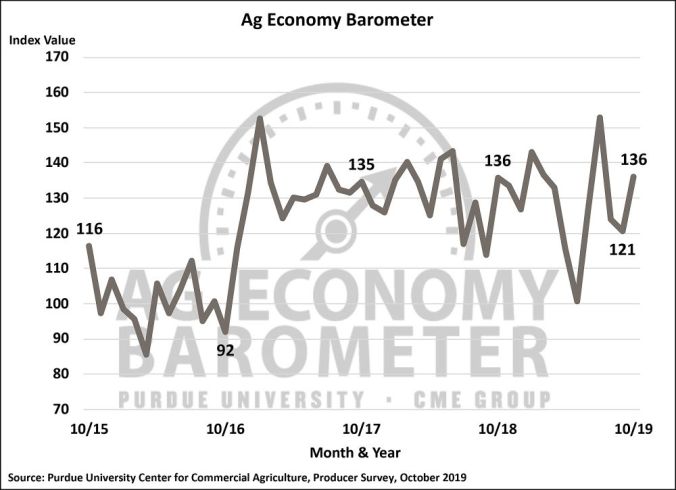 “Almost across the board, farmers were more optimistic about the agricultural economy in October,” said James Mintert, the barometer’s principal investigator and director of Purdue University’s Center for Commercial Agriculture. “While the level of optimism among farmers is higher than earlier this year, the survey uncovered additional uncertainty related to trade agreements that are still being negotiated.”

In addition to the standard survey, questions were added to this month’s barometer survey to gauge whether farmers feel these pending trade agreements are important to the U.S. agricultural economy. END_OF_DOCUMENT_TOKEN_TO_BE_REPLACED

Washington, D.C., November 5, 2019 – U.S. Secretary of Agriculture Sonny Perdue will lead a trade mission to Mexico November 6-8 to forge new opportunities with U.S. agriculture’s largest bilateral trading partner and second-largest export market. The Secretary will be joined by Under Secretary for Trade and Foreign Agricultural Affairs Ted McKinney and more than 100 industry and government representatives. On Thursday, November 7th, Secretary Perdue will hold a press call regarding the trade mission.

Accompanying Secretary Perdue are the heads of six state departments of agriculture: Bryan Hurlburt of Connecticut, Celia Gould of Idaho, Joseph Bartenfelder of Maryland, Chris Chinn of Missouri, Doug Goehring of North Dakota, and Derek Sandison of Washington. Other participants include officials from the California, Georgia, Minnesota, Nebraska, Nevada, Oregon, Wisconsin and Virginia departments of agriculture and representatives from the following companies and organizations:

END_OF_DOCUMENT_TOKEN_TO_BE_REPLACED

Ross Optimistic U.S. Will Reach Phase One Agreement with China

Commerce Secretary Wilbur Ross seems confident the U.S. and China will reach a “phase one” agreement this month on trade. Speaking at the Association of Southeast Asian Nations, Ross says the U.S. and China are “making good process,” according to Bloomberg News. He added that Iowa, Alaska, Hawaii and locations in China were all possible places for Trump and Xi Jinping to sign the deal after  Chile canceled the Asia-Pacific Economic Cooperation summit. The two leaders were expected to sign the agreement during the event in Chile later this month. President Donald Trump told reporters that if an agreement is reached, it would be signed somewhere in the United States. China Monday offered little comment regarding a location to sign the agreement, only to say the U.S. and China are in constant communication. Meanwhile, Ross wouldn’t say whether the U.S. would halt new tariffs on China planned in December. China has asked the U.S. to suspend the December round of tariffs, as a condition of signing the phase one agreement.

Vice President Mike Pence again called on the House of Representatives to bring the U.S.-Mexico-Canada Agreement to a vote. Speaking at an event in Virginia over the weekend, Pence says Democrats in the House “are spending all their time on endless investigations and a partisan impeachment.” Pence told the event, “The time has come for your congressmen and every Democrat from Virginia to put politics aside and pass USMCA.” House Democrats maintain the impeachment process will not impede progress on the trade agreement. House Speaker Nancy Pelosi last week hinted she was optimistic they could reach a deal with the White House. Few days remain on the legislative calendar to pass the agreement this year, and the House is on recess this week. Pelosi told reporters last week, “hopefully we can do it sooner,” but she wouldn’t rule out the process stretching into next year. The U.S., Canada and Mexico agreed to the accord now more than a year ago, and Mexico ratified the agreement this summer.

President Donald Trump’s nominee to head the Food and Drug Administration offers a bolstered resume in the medical field. Trump recently announced Stephen Hahn of Texas as the nominee to be the next FDA Commissioner. Hahn has been Chief Medical Executive at The University of Texas MD Anderson Cancer Center in Houston, Texas, since May of 2018. MDACC is a research-driven patient care organization that has approximately 21,000 employees with an annual revenue of $5 billion and the largest number of clinical trials in the United States. As a radiation oncologist, Dr. Hahn specializes in treating lung cancer and sarcoma. Politico reports Hahn offers a sharp contrast from former FDA chief Scott Gottlieb, as Hahn’s last government job was in the 1990s, while Gotleib had a wealth of federal experience when nominated. The nomination passes over acting commissioner Ned Sharpless, who is the former head of the National Cancer Institute. Hahn must be confirmed by the Senate.

Legislation introduced Monday would create a new research agency in the Department of Agriculture. Introduced by Senator Michael Bennet, a Colorado Democrat, and Representative Cindy Axne, an Iowa Democrat, the legislation would create the Advanced Research Projects Agency–Terra (Latin for land) to invest in innovative technologies that increase economic opportunity for farmers. ARPA–Terra would provide competitive funding to land-grant universities for early stage research on technologies that industry might not undertake due to the long-term and high-risk technological barriers that exist. The agency will enable the United States to develop technologies – and put them in the hands of farmers to enhance export competitiveness, environmental sustainability, and crop resilience to extreme weather. Axne says the bill “will help our researchers continue to lead the way in Agriculture science and development.” Bennet says the legislation will “strengthen American global leadership in agricultural research and development.” The lawmakers point out that the legislation is supported by the American Farm Bureau Federation.

Continuing support for rural broadband, the Department of Agriculture Monday announced a $3.8 million broadband investment in Virginia. The announcement creates and improves high-speed broadband connections to more than 1,250 rural homes in Virginia as part of the new ReConnect Pilot Program investments. DJ LaVoy, deputy undersecretary for rural development, says the USDA mission of increasing rural prosperity “cannot be achieved without addressing the digital divide rural communities face.” In March of 2018, Congress provided $600 million to USDA to expand broadband infrastructure and services in rural America. Agriculture Secretary Sonny Perdue announced the ReConnect program in December, and started receiving applications in May of this year. USDA received 146 applications requesting $1.4 billion in funding across all three ReConnect Program funding products, a 100 percent loan, 100 percent grant, and loan-grant combinations. USDA is reviewing applications and announcing approved projects on a rolling basis. Additional investments will be announced in the coming weeks.

Propane delivery issues prompted Iowa’s Governor to sign an emergency proclamation last week. The Emergency Executive Order signed by Governor Kim Reynolds will help “help resolve delivery challenges resulting from increased seasonal propane demands,” according to the Iowa Department of Agriculture. The proclamation exempts drivers of commercial motor vehicles delivering propane from the hours of service requirements during November. Iowa Agriculture Secretary Mike Naig says a late harvest and wet weather has left farmers with higher-than-normal moisture levels in their corn. The propane industry states there is propane available in the Midwest, but there are transportation and pipeline capacity limitations that are creating logistical challenges. The Iowa Department of Agriculture is working with the Iowa Propane Gas Association to monitor the situation and explore options to expedite the delivery of propane to homes, farms and businesses. The industry is tracking potential interruptions to rail or pipeline distribution lines and working with those industries to help facilitate the movement of propane during peak demand periods.