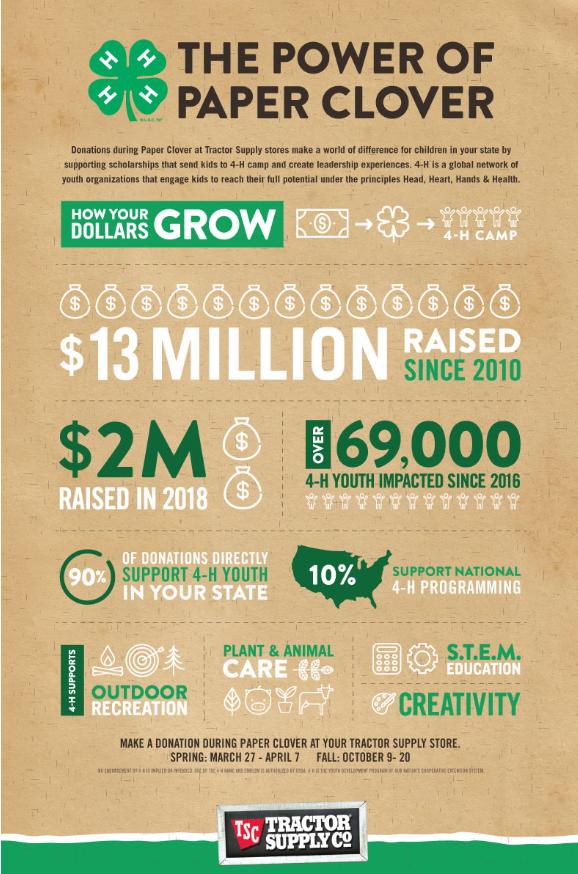 Oct. 2, 2019 – Tractor Supply Company continues its mission to support youth in their local communities by launching its Fall Paper Clover campaign, a biannual fundraiser in partnership with National 4-H Council to provide scholarships for 4-H members.

The Paper Clover fundraiser provides thousands of dollars each year to offer opportunities for youth to attend conferences, 4-H camps and other developmental programs across the nation. This fall, Tractor Supply is asking for customers to help them reach the $1 million goal by raising awareness of the campaign via social media shares of their paper clover donations with #DonateAMillion. END_OF_DOCUMENT_TOKEN_TO_BE_REPLACED

Colorado Corn – Focused on the Future –  learn more about the work they do for Corn Producers in the state by visiting www.ColoradoCorn.com

DENVER, CO – The Fleischer’s travels have led to many adventures including living in the UK working for AmeriCorps, teaching English in Seoul Korea, and even working at an orphanage in Africa. They finally settled in Denver, Colorado in 2009 where they not only found their life’s purpose but found it to be an equally adventurous experience. Paul and Chelsie Fleischer own and operate The Fleischer Family Farm, one of Denver’s successful urban agricultural operations. Paul is also a teacher at Alameda High School where he works with kids with special needs and teaches high school agriculture.

“When we came back stateside, we moved to Colorado because I loved the state, but I was basically looking for work,” said Paul. “I got a job working for Greenpeace and rose through the ranks. I travelled internationally and got to work on a number of amazing projects, but I got burned out, so I got my teachers license, started teaching at a school that had a farm on the property, and that, oddly enough is what lead me to a love of farming and my career in agriculture.”

END_OF_DOCUMENT_TOKEN_TO_BE_REPLACED 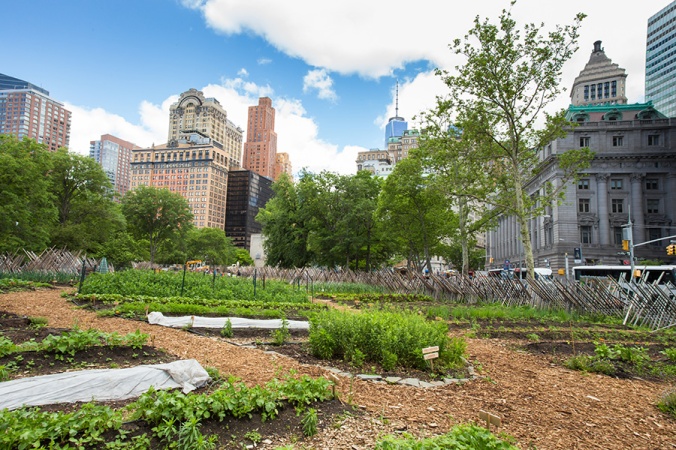 NRCS-CO: USDA and the City and County of Denver Partner to Publish a Soil Survey of Denver County

“This is an exciting time in soil data collection,” said Andy Steinert, MLRA Soil Survey Leader. “In the past, urban areas were low priority as conservation efforts were focused on cropland and rangelands. Today we have more knowledge and a better understanding of urban soils, how they function and our ability to identify and map them”.

END_OF_DOCUMENT_TOKEN_TO_BE_REPLACED

Broomfield, Colo. – Celebrate World Egg Day on October 11 with Colorado eggs. There are more than 4.5 million laying hens in Colorado, producing 1.4 billion eggs every year. Eggs are a source of high-quality protein and contain 13 essential vitamins and minerals, all for 70 calories per large egg. Look for Colorado eggs at your local grocery store or at restaurants across the state.

Each month the Colorado Department of Agriculture features a different commodity to highlight the variety and quality of products grown in the state. The following recipe is provided by Chef Jason K. Morse, C.E.C., of 5280 Culinary, LLC:

MANHATTAN, KANSAS, October 1, 2019—Dr. Alfonso Clavijo has been appointed as Director of the National Bio and Agro-Defense Facility (NBAF), a state-of-the-art U.S. Department of Agriculture (USDA) research and diagnostic facility designed to protect the nation’s agricultural systems and stakeholders against the threat and potential impact of serious animal diseases.

“Dr. Clavijo brings with him a wealth of technical knowledge in the diagnosis of transboundary, emerging and zoonotic diseases,” said Dr. Chavonda Jacobs-Young, Administrator for USDA’s Agricultural Research Service (ARS). “As NBAF’s first permanent director, his extensive leadership experience will be a great asset in helping NBAF achieve its vision of being a national asset that protects U.S. agriculture and consumers through cutting-edge research, diagnostics, training, and development of vaccines and other countermeasures.”

ARS partners with USDA’s Animal and Plant Health Inspection Service (APHIS) to operate NBAF. The facility is currently under construction by the U.S. Department of Homeland Security (DHS) with commissioning scheduled for completion in 2021.

END_OF_DOCUMENT_TOKEN_TO_BE_REPLACED 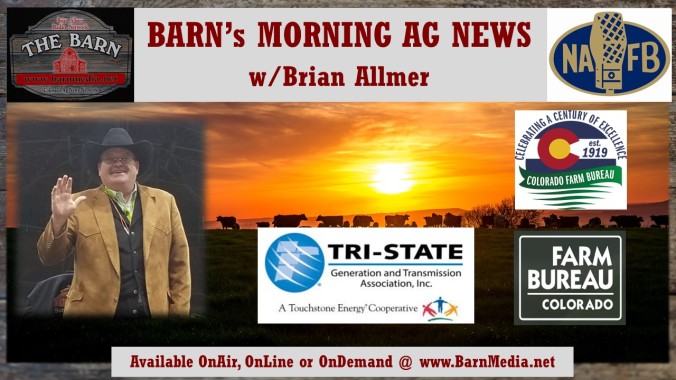 A monthly measure of farmer sentiment shows producers are more pessimistic about current conditions. The monthly Purdue/CME Group Ag Economy Barometer slipped to 121, down three points from August. However, the Index of Current Conditions, a sub-index of the barometer, dropped 22 points to a reading of 100. The barometer is based on a mid-month survey of 400 agricultural producers across the United States. A reading of 100 is considered neutral, with anything below negative, and anything above, positive. Despite the weak near-term outlook provided by farmers, they expressed some optimism about the future. The Index of Future Expectations rose six points compared to August. In the September survey, only one in five producers said they expect profitability to decline over the next year, compared to 41 percent back in May. Organizers say this could be a signal that farmers expect better times in 2020 compared to 2019, possibly because they are looking forward to a return to more normal growing conditions and crop production.

Senate Majority Leader Mitch McConnell hopes lawmakers can reach a resolution on the U.S.-Mexico-Canada Agreement soon. Speaking to CNBC this week, McConnell says “USMCA is something we can agree on,” referring to the Democrat-led House of Representatives and Republican-led Senate. President Donald Trump announced the three nations reached an agreement one year ago this week. Concerns regarding the impeachment effort in the House are building as some fear the effort may derail USMCA. However, House Speaker Nancy Pelosi says the USMCA working group will continue efforts to reach an agreement with the White House. However, labor and environment provisions remain as sticking points in the talks. Agriculture Secretary Sonny Perdue told dairy farmers Tuesday at World Dairy Expo he is optimistic a vote in the House will happen soon. Perdue says every provision in the agreement is an improvement, compared with the North American Free Trade Agreement, for U.S. agriculture. Mexico has already ratified the agreement and Canada is expected to do so following its federal elections later this month.

Agriculture groups are urging the Department of Agriculture to move quickly to establish a Foot-and-Mouth Disease vaccine bank. The National Pork Producers Council, National Milk Producers Federation, National Corn Growers Association and Iowa State University, made the joint call during a Tuesday press event. Recognizing the steps USDA has taken to establish the bank, the groups called for “expedient use of mandatory funding included in the 2018 farm bill to purchase the volume of vaccines required to effectively contain and eradicate an FMD outbreak.” The groups say USDA currently does not have access to enough vaccines to avoid “devastating economic consequences,” should an outbreak occur. FMD is an infectious viral disease that affects cloven-hooved animals, including cattle, pigs and sheep. Iowa State University research predicts an outbreak would result in $128 billion in losses for the beef and pork sectors, $44 billion and $25 billion, respectively, to corn and soybean farmers, and job losses of more than 1.5 million across U.S. agriculture over ten years.

The American Farm Bureau Federation and the National Industrial Hemp Council are seeking crop protection tools for hemp. The two groups have asked the Environmental Protection Agency to consider ten crop protection product applications approved for use on hemp. The groups made the request in rulemaking comments submitted to the agency. For hemp to reach its full potential, the groups say, “it is essential the EPA take a leadership role in the consistent review of applications for use on hemp, to facilitate a consistent and equal playing field across state jurisdictions.” Interest in hemp production is growing since authorized by the 2018 farm bill. However, farmers lack access to approved crop protection products. EPA requested comments regarding adding hemp to the labels of products registered under the Federal Insecticide, Fungicide, and Rodenticide Act. The groups also asked EPA to approve the products and additional applications to expand the range of approved products and provide their members with legal options for pest control beginning in 2020.

Although the total value of U.S. agricultural sales remained relatively flat between 2012 and 2017, U.S. organic sales more than doubled to $7.3 billion. The Department of Agriculture’s Economic Research Service reports growth in the U.S. organic sector has accelerated since the early 2010s as retailers, food manufacturers, and livestock producers have increased demand for organic food and inputs. Agricultural sales averaged $400,600 for organic operations in 2017, more than double the average agricultural sales for all farms of $190,200. The organic share of U.S. agricultural sales doubled to two percent between 2012 and 2017, and was over six percent in some states. California was the top State in both organic and overall agricultural sales. Most other top organic states were in the Pacific Northwest, Upper Midwest and Northeast. Pennsylvania and North Carolina were among the states with the fastest growth, with organic sales up ten- and eight-fold, respectively. In contrast, Iowa ranked second in overall agricultural sales and twelfth in organic sales, reflecting the low adoption of organic systems for U.S. grain production.

The National Pork Board Tuesday announced Chris Hoffman as the 2019-2020 Pig Farmer of the Year. Hoffman, a first-generation hog farmer from McAlisterville, Pennsylvania, received the highest combined score in third-party judging and online voting in the contest. The award recognizes pig farmers in the U.S. that exemplify industry leadership, a demonstrated focus in raising pigs following the We Care ethical principles and a commitment to connecting consumers with the farmers who raise the pork they consume. National Pork Board President David Newman calls Hoffman a “strong advocate” for the pork industry. Hoffman was named America’s Pig Farmer of the Year after an on-farm audit of animal health, safety and management practices, a series of personal interviews and an online vote. Hoffman says of the achievement, “I want to meet with our nation’s leaders, including the president, and show them that we are an integral part of our food supply and the nation’s workforce.” Learn more about Hoffman and the America’s Pig Farmer of the Year Award at americaspigfarmer.com.