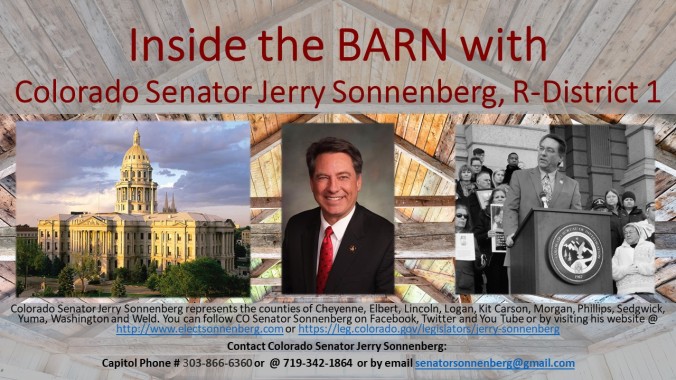 Inside the BARN with CO Senator Jerry Sonnenberg…

To listen to the interview, click the audio mp3 link below…

Jerry Sonnenberg is a Colorado native who has been farming and ranching in northeastern Colorado his entire life. He continues to live and work on the same farm that both his father and he were raised on growing wheat, corn, sunflowers, millet and cattle. Senator Sonnenberg was first elected to the Colorado House of Representatives in 2006 and immediately became a strong voice for agriculture and rural Colorado. After serving 8 years he was elected to serve from District 1 in the Colorado Senate where he represents the counties of Cheyenne, Elbert, Lincoln, Logan, Kit Carson, Morgan, Phillips, Sedgwick, Yuma, Washinton and Weld. Because of his leadership abilities, agriculture background and experience in Colorado’s land and water issues, Jerry currently serves as the chairman of the Senate Agriculture, Natural Resources and Energy Committee. He also serves as vice-chair of Senate State, Veterans and Military Affairs Committee and is a member of both Senate Appropriations Committee and Capital Development Committee. Senator Sonnenberg has proposed legislation during his tenure that has reinstated the ag sales tax exemption; tried to eliminate the governments use of eminent domain in acquiring water rights; authorize spending on water projects; making it easier to build water storage projects; protect agriculture data given to government from access by the public; allows trucks to be more efficient by utilizing triple axles and larger loads on secondary roads; encourage Division of Wildlife to utilize easements rather than fee-title acquisition; secure emergency funding in tough economic times for K-12 education; create a stable funding source for highways; protect law-abiding citizens from the Governor tramping on their gun rights; secure funding for community colleges; regulatory reform and removing regulations; drug testing as a condition of receiving government assistance. Jerry was born and raised in Sterling, Colorado graduating from Sterling High School. He married Vonnie Constance Sonnenberg, a teacher at Merino Elementary School, and together have four children; Ashley, and her husband Chad Renslow of Colorado Springs, CO; Afton, her husband Russel Dains, their daughter,Cambrei and twins Caleb and Cailyn of Henderson, CO; Joshua and his wife Dani of Sterling; and Ryan also of Sterling.