Denver Business Journal is preparing its inaugural Who’s Who In Agriculture report, honoring 40 accomplished movers and shakers within the industry that puts food on our plates and pumps billions into the Colorado economy each year.

Who’s Who in Agriculture recognizes individuals whose position, knowledge or expertise helps guide the sector. Nominees were accepted from any field, including (but not limited to) crop production, livestock production, water, education, biotech, agribusiness and food/nutrition.

A networking event recognizing the honorees and featuring a DBJ-moderated armchair dialogue with former Secretary of Agriculture Tom Vilsack and Ardent Mills COO Bill Stoufer will be held Thursday, May 9, from 4-7 p.m. at The Brown Palace Hotel and Spa at 321 17th St.

The entire report, including a feature on Trailblazer Award winner Sakata Farms, will be published online and in the May 24 weekly print edition. 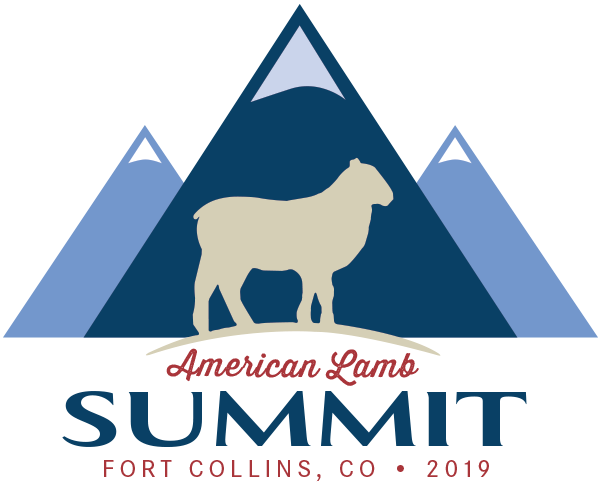 The first ever American Lamb Summit , sponsored by the American Lamb Board and Premier 1 Supplies, will address critical strategies to improve our industry’s product competitiveness and profitability. The two-day program is August 27-28, 2019, in Fort Collins, CO.

“Meating” the Needs of the New Lamb Consumer kicks off the event, with an in-depth discussion of what our customers and consumers need/want and how to deliver the value attributes for which they are willing to pay a premium. Next, guest speakers Dave Pethick, PhD, from Australia and Phil Hadley, PhD,  from the United Kingdom, share what their lamb industries are doing to improve product value and meet customer expectations. The panelists will share insights on how farmers and ranchers can manage the relationship between eating quality and lean meat yield. END_OF_DOCUMENT_TOKEN_TO_BE_REPLACED

On the heels of unsuccessful trade negotiations with China, the White House is expected to increase tariffs from 10 percent to 25 percent on $200 billion worth of Chinese goods early Friday morning. President Donald Trump has also threatened to levy duties on an additional $325 billion worth of imports, which, if implemented, would mean that nearly all U.S. imports from China would be subject to tariffs. In response, Beijing plans to enforce “necessary countermeasures,” on top of the tariffs they have already imposed on $110 billion worth of U.S. products.

DENVER, CO – May 6, 2019 – Egypt is the second-largest market for U.S. beef variety meat (behind Mexico) and the largest destination for U.S. beef livers.

All U.S. beef entering Egypt must be halal-certified, and exporters previously contracted with any one of six approved entities to provide this certification. But effective May 1, the government of Egypt recognizes only one approved halal certifier. Paul Clayton, U.S. Meat Export Federation (USMEF) senior vice president for export services, explains that this could disrupt exports to Egypt, though USMEF is working with USDA and its member companies to keep product moving as smoothly as possible.

Last year the volume of livers exported to Egypt exceeded 54,000 metric tons, accounting for 65% of all U.S. liver exports. But this was down from a peak of 82% in 2015, and Clayton says USMEF has been working for several years to develop a wider range of markets for beef livers, which includes South Africa, Peru and Colombia. He notes that Tunisia, which recently opened to U.S. beef, is also a potential market for U.S. livers.

END_OF_DOCUMENT_TOKEN_TO_BE_REPLACED

RMFU: Colorado Session Is Over: Here Are The Bills Worth Your Attention

It was another busy session for Rocky Mountain Farmers Union as bills impacting water, hemp, food safety, and rural Colorado remained topics of discussion throughout the session. One highlight for rural Colorado was the Legislature’s ability to fulfill the campaign promise of Governor Jared Polis to provide free, full day kindergarten. After much debate on how to fund the expansion, the Joint Budget Committee set aside $175 million during the March budgeting process to be appropriated to the bill, HB19-1262, which then passed the full legislature by the end of April. END_OF_DOCUMENT_TOKEN_TO_BE_REPLACED 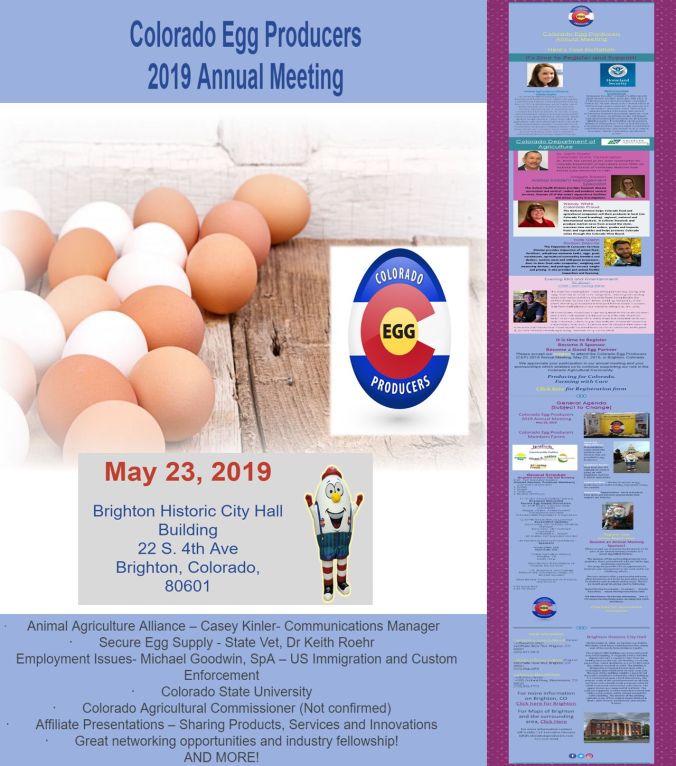 Make Plans to attend the 2019 Colorado Egg Producers Annual Meeting in Brighton, CO on May 23rd 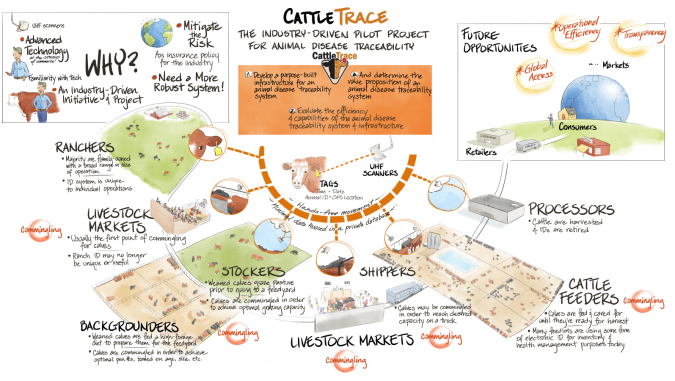 MANHATTAN, Kan. – In an effort to provide educational tools for explaining Animal Disease Traceability in the beef industry and to highlight the basics of the CattleTrace program, we developed a video which is now available for anyone to view and share. Go to the About Us page on www.CattleTrace.org to share it, and check it out above or below.

END_OF_DOCUMENT_TOKEN_TO_BE_REPLACED

MANHATTAN, Kan. – Through collaboration with the Nebraska Department of Agriculture Animal Health Focus Area, UHF readers were installed at a backgrounding yard in central Nebraska. Cattle move from Wisconsin to the backgrounder in Nebraska, and then travel to a feedyard in Kansas before ending up at a processing facility in the state of Kansas. The goal is to demonstrate traceability through different operations across the country, each with unique set-ups and applications of UHF technology. END_OF_DOCUMENT_TOKEN_TO_BE_REPLACED

Weekly Export Sales for May 9th 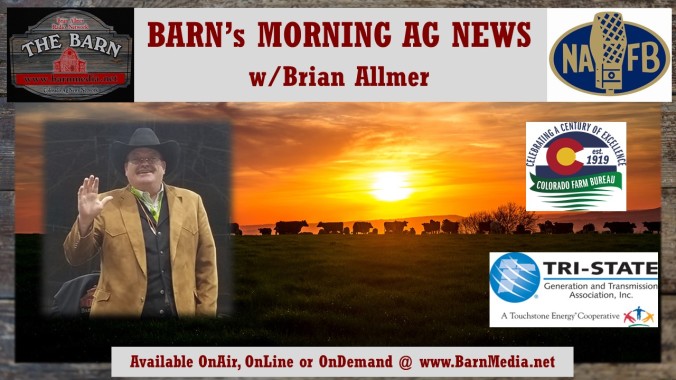 READ the NAFB’s National Ag News for Thursday, May 9th

A bipartisan coalition of 35 members of the House of Representatives says the Environmental Protection Agency should stop issuing small refiner exemptions to large or unqualified refiners. The EPA has approved 54 waivers through the Renewable Fuel Standard, totaling 2.61 billion ethanol-equivalent gallons of renewable fuels in the past year and a half, and has 40 more waiver petitions pending. In a letter, led by Representatives Cindy Axne of Iowa and Adrian Smith of Nebraska, the lawmakers say the “unprecedented rate of granting waivers is a betrayal of our rural communities.” The National Corn Growers Association and others welcomed the letter, saying the action sends a “strong message to EPA to stop granting unjustified waivers.” The lawmakers say the EPA must halt the process and reallocate waived gallons as intended by law. NCGA has consistently called on the Trump administration to “rein in RFS exemptions” for refiners with large profits, and account for waived biofuels blending and increase transparency in the process.

Agriculture Secretary Sonny Perdue will travel to Japan and South Korea next week to participate in the G-20 Agriculture Ministers’ Meeting. The travel itinerary also includes meetings with his counterparts on global agriculture issues. The Secretary will deliver a keynote address at the G-20 Innovation and Agriculture seminar this Saturday and speak at the Cotton Council International’s annual Cotton Day on May 14. As part of his meetings, Perdue will join his counterparts from Argentina, Brazil, Canada, and Mexico to discuss global agriculture issues. The Secretary has planned meetings with U.S. Ambassador to Japan William Hagerty, and Japan’s State Minister of Health, Labor, and Welfare, along with Korea’s Agriculture Minister. During the trip, Perdue will attend a U.S. Meat Export Federation promotional event highlighting the importance of the Japanese market for U.S. meat, as USDA says Japan is the top overseas market for U.S. beef and pork. Finally, Perdue will attend the U.S.-Japan Agriculture Hall of Fame Induction Ceremony, as part of his travels.

Economists from the University of Illinois and Ohio State University say serious planting delays will result in reduced yields this year. Gary Schnitkey of Illinois and Carl Zulauf (Zoo-laff) of Ohio point out that history suggests the odds have increased for lower corn yields in 2019 compared to 2018, and soybean yields will likely not be exceptional. Very little planting has occurred over much of the Corn Belt, as 23 percent of corn was reported planted in the top 18 corn-producing states, compared to a 46 percent average for the last five years at this time in the spring. Late planting does not necessarily mean that 2019 yields will be low. In 2009, much late planting of corn occurred, and national yields were still ten bushels above trend. However, the two economists write that yields have been exceptionally higher across the Midwest recently. With delayed planting, yields are expected to be more towards average. Higher yields kept net incomes high enough for farmers to get by last year, but that may be gone in 2019.

The Department of Agriculture’s Farm Service Agency announced this week the March 2019 income over feed cost margin was $8.85 per hundredweight. The level triggers the third payment for dairy producers who purchase the appropriate level of coverage under the new Dairy Margin Coverage program. The new program replaces the Margin Protection Program for Dairy and offers protection to dairy producers when the difference between the all-milk price and the average feed cost falls below a certain dollar amount selected by the producer. The signup period for the new Dairy Margin Coverage program opens June 17, 2019. Dairy producers who elect a coverage level between $9 and $9.50 would be eligible for a payment for January, February and March 2019. FSA Administrator Richard Fordyce says that under certain coverage levels, the amount to be paid to dairy farmers for the months of January, February and March already exceed the cost of the premium. He encouraged all dairy operations to sign up for the program when it becomes available.

California Wednesday announced a ban of chlorpyrifos (clo-PEER-uh-foss)​ use within the state. The state Environmental Protection Agency chose to ban chlorpyrifos following what it calls mounting evidence that the pesticide “causes serious health effects in children and other sensitive populations at lower levels of exposure than previously understood.” Chlorpyrifos is an insecticide used to control many different kinds of pests, such as those found in roughly 50 different crops including corn and soybeans. CalEPA Secretary Jared Blumenfeld says the state action to cancel registries for chlorpyrifos “is needed to prevent the significant harm this pesticide causes children, farm workers and vulnerable communities.” California is also proposing to use $5.7 million in funding for additional research and technical assistance in research to identify safer alternatives. Just last week, New York lawmakers approved a ban of chlorpyrifos. The California and New York bans follow the first state ban enacted in Hawaii last year.

The North Dakota Grain Growers Association this week voted to withdraw from the National Association of Wheat Growers. North Dakota farmers cited a belief that the organization is “no longer seeing an adequate return on investment” from membership in the national group. The association says North Dakota has consistently “paid some of the highest dues out of all states” represented by NAWG. The National Association says staff and leadership “did everything possible” to address North Dakota’s Concerns, and President Ben Scholz says the organization “went above and beyond to meet the concerns of NDGGA by giving them a national voice on Capitol Hill.” NAWG charges that over the past two years, North Dakota “put their interests ahead of all wheat growers” across the country by withholding half their dues, making it difficult to carry out the overall mission of the organization. The state organization has been a member of the national organization since 1977. It’s membership contract will expire at the end of June.