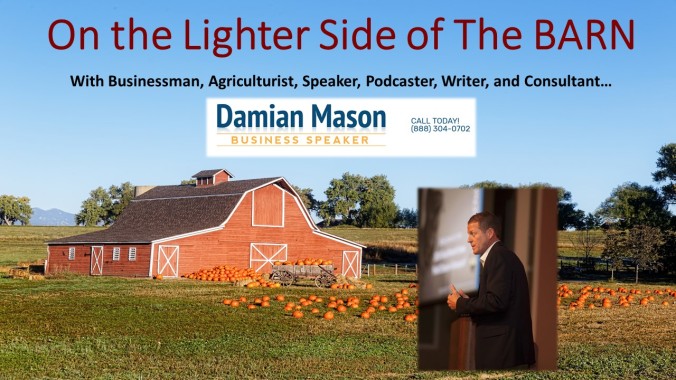 On the Lighter Side of The BARN featuring Damian Mason…

DENVER, CO – February 26, 2019 – Brian Allmer of The BARN had a chance to sit down and visit with Businessman, Agriculturist, Speaker, Podcaster, Writer, and Consultant Damian Mason the evening before he delivers his keynote address at the 2019 Governor’s Forum on Colorado Agriculture in Denver on February 27, and we covered quite a few topics in an educational yet humous way…see for yourself…

Damian Mason speaks on the two subjects he knows best: Business and Agriculture.  Since 1994, he has spoken to nearly 2,000 audiences in all 50 states and 7 foreign countries.

END_OF_DOCUMENT_TOKEN_TO_BE_REPLACED

Syngenta will donate $10,000 to the National Watermelon Association to commemorate the billionth transplant shipped through the Full Count transplant program. Funds will be allocated to support growth of regional watermelon queen programs.

GREENSBORO, N.C., USA, February 26, 2019 – In 2018, Syngenta did something through its Full Count® plant program that no other transplant program provider has done: it shipped its billionth watermelon transplant. To commemorate the milestone, Syngenta announced that it has donated $10,000 to the National Watermelon Association (NWA). Syngenta is a major sponsor and supporter of the NWA and its national convention each year. END_OF_DOCUMENT_TOKEN_TO_BE_REPLACED

Denver, Colo. – Colorado State University System today released the full program for the second annual Water in the West Symposium, with more than 20 experts confirmed from across the globe.

Speakers represent a variety of water interests, such as recreation, business, agriculture, utility, and research. The Symposium, which sold out in 2018, is an initial offering of the CSU Water Building, one of three buildings that will comprise the future CSU Campus at the National Western Center. END_OF_DOCUMENT_TOKEN_TO_BE_REPLACED

Register today for the 2019 Legislative and Leadership Summit

The Legislative and Leadership Summit provides an opportunity for CFB members to build leadership skills and be better spokespersons (advocates) for agriculture with public officials and state legislators. The Summit features updates from policymakers, training on effectively communicating with elected officials, and the opportunity to interface with state legislative leaders.

Attendees will also attend the Colorado Ag Day celebration at the State Capitol and have the opportunity to meet new legislators and discuss issues important to agriculture and rural Colorado.

Secretary Perdue will make two appearances in front of the U.S. Senate and U.S. House of Representatives respective agriculture committees this week.

“Secretary Perdue has two very important opportunities ahead of him this week to lay the groundwork for improvements to the farm safety net,” said NFU President Roger Johnson. “Oversupply and trade disruptions, among other issues currently plaguing the farm economy, are likely to continue to depress farm prices into the foreseeable future. Family farmers and ranchers need a strong safety net to continue to weather these difficult economic circumstances. We need the Secretary to be a strong advocate at this critical juncture for family farm agriculture.”

The Secretary will first headline a Wednesday U.S. House Agriculture Committee hearing on the state of the rural economy. END_OF_DOCUMENT_TOKEN_TO_BE_REPLACED

President Trump has delayed additional tariffs on China with more talks expected. Trump extended the March 1 deadline to allow for talks to continue as China also announced an additional 10 million metric ton purchase intention of U.S. soybeans. China proposed last week in talks to increase purchases of U.S. commodities by $30 billion a year more than pre-trade war levels. President Trump reported over the weekend that the U.S. “has made substantial progress” in talks with China, in announcing he would postpone the planned tariff rate hike, which also served as the negotiating deadline. Tariffs Hurt the Heartland, a nationwide campaign formed when the trade war began, called the announced encouraging, calling for a solution “as soon as possible that ends the tariff uncertainty” and “improves the U.S.-China trading relationship.” The group contends that tariffs are “ultimately taxes paid by American businesses.” President Trump says he and China’s President will plan a Summit in the U.S. to conclude an agreement if both sides make additional progress.

The recent announcement by China to purchase more U.S. soybeans fails to make up for trade war losses. The American Soybean Association welcomed the announcement made last week, but says the industry needs “structural reform that leads to China rescinding its tariff on U.S. soybeans and fully reopening the market,” according to ASA President Davie Stephens of Kentucky. China announced the intention to purchase 10 million metric tons of U.S. soybeans. ASA says the industry’s greatest fear is long-term damage to the relationship it has built and sustained with China. The value of U.S. soybean exports to China has grown 26-fold in 20 years, from $414 million in 1996 to $14 billion in 2017, according to ASA. Over the next ten years, Chinese demand for soybeans is expected to account for most of the growth in global soybean trade, making it a prime market for the U.S. and other countries. The organization is calling on the Trump administration to continue its talks with China in an effort to rescind the tariffs as part of the negotiated outcomes.

The Creighton University Rural Mainstreet Index for February fell but remained above growth neutral. The monthly survey of bank CEOs in rural areas of a 10-state Midwest region dependent on agriculture and energy sank to 50.2 from January’s 51.5. This was the 11th time in the past 12 months the index has remained above growth neutral. The index ranges between 0 and 100 with 50.0 representing growth neutral. Organizers of the survey say weak farm income has pushed almost two-thirds of banks to increase collateral requirements on farm loans. Ernie Goss of Creighton University says the survey shows the rural economy is “expanding outside of agriculture,” however, the negative impacts of tariffs and low agriculture commodity prices continue to weaken the farm sector.” Almost two-thirds of respondents, or 62.6 percent, indicated collateral requirements have been raised on farm loans. This compares to 45.2 percent for February 2018. Almost one-third, or 30.3 percent of bankers, reported that a higher percentage of farm loan applications had been rejected.

The Environmental Protection Agency will conduct a long-delayed study to assess the impact ethanol-blended fuels have on air quality. Reuters reports the EPA agreed to conduct the study late last week, as the Sierra Club had filed a lawsuit against the EPA last year in an effort to compel the agency to conduct the study. The organization states the study was supposed to be done roughly eight years ago. The Sierra Club and the EPA recently reached a partial agreement resulting in the EPA conducting the so-called anti-backsliding study by March of next year. The outcome of the study seems certain to influence future Renewable Fuel Standard regulations set by the EPA, including annual targets for ethanol and biodiesel use in the nations fuel supply. The Sierra Club is a well-known critic of the RFS. An association fact sheet claims that since the standard’s adoption in 2007, “it has become clear that the RFS has had unintended and devastating consequences for wildlife and wildlife habitat, and may even be undermining its own stated goals.”

Vice President Mike Pence last week promised a gathering of governors in Washington, D.C. the U.S. would pass a “historic” infrastructure bill by the end of next year. The Washington Post reports the action would require bipartisan cooperation. Specifically, Pence told the group “I’ll make you a promise,” while asking for help from the governors, that “in this Congress, we’re going to pass historic infrastructure legislation.” President Trump campaigned on addressing infrastructure and proposed a plan to create $1.5 trillion in new spending on infrastructure issues, including those in rural areas. However, the plan has so far been stalled. House Speaker Nancy Pelosi did identify infrastructure as a priority for Congress, but Democrats and Republicans have different plans in mind. More than 30 governors across the nation attending the National Governors Association annual meeting attended the Pence event. Pence told the governors new legislation is being discussed and that state governors will play a leading voice in crafting the bill.

Iowa is appealing a federal court ruling against the state’s ‘ag-gag’ rule. Iowa attorney general Tim Miller filed the appeal against a federal ruling deeming the regulation unconstitutional. The rule has been in effect since 2012 and made it illegal for activists to lie to gain access to livestock operations and shoot unauthorized video, according to meat industry publication Meatingplace. The 2012 law was aimed at preventing activists from gaining access to farms and packing plants on false pretenses in order to videotape and publicize potentially unflattering activity, but a federal judge ruled that the law hinders free speech. In filing the appeal, Miller says the defendants “submit there is substantial ground for difference of opinion” as to whether law restricts protected speech in violation of the First Amendment. Miller says the Supreme Court has held “false speech” that imposes a legally recognized harm or provides a material gain to the speaker is not protected under the First Amendment.