DENVER — Thursday, Nov. 1, 2018 — Colorado Governor John Hickenlooper joined governors from California, Hawaii, Oregon, and Washington in signing a letter committing to upholding the standards set forth in the Clean Air and Water Acts, despite changes to federal standards in Washington D.C.

“We will not run from our responsibility to protect and improve clean air and water for future generations,” said Governor John Hickenlooper. “We know it will take collaboration just like this to make it happen. Changes at the federal level will not distract from our goals.” END_OF_DOCUMENT_TOKEN_TO_BE_REPLACED

DENVER — Thursday, Nov. 1, 2018 — Governor John Hickenlooper delivered the Fiscal Year (FY) 2019-20 State budget request to the Joint Budget Committee (JBC) of the General Assembly. Relative to expected FY 2018-19 appropriations, the request reflects a total funds budget of $33.4 billion, an increase of $1.5 billion or 4.8 percent. In the General Fund, the request totals $13.2 billion, an increase of $0.6 billion or 4.7 percent, with more than 40 percent of the requested increases for strategic investments.   END_OF_DOCUMENT_TOKEN_TO_BE_REPLACED

Listen to the interview with RMFU’s Harrison Topp… 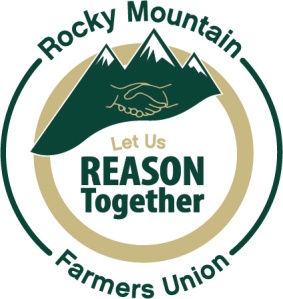 DENVER, C­olo. ­­– Farmers and ranchers from Colorado, New Mexico, and Wyoming will “Reason Together” at the 110th Rocky Mountain Farmers Union annual convention set for Nov. 16-17 in Cheyenne, Wy. The convention theme “Let Us Reason Together” will resonate through the event, with educational panels, guest speakers, and break-out sessions all focusing on ways producers can profit from collaboration and cooperation.

The third annual Innovation Fair will take place as a pre-convention attraction. The Innovation Fair will include presentations on brewing and malting, land access, vermicompost, direct marketing, women in agriculture, handling farm stress, meat processing, block chain systems, and much more. Registration for the Innovation Fair is free for students and Farmers Union members and $25 for non-members.  The event will begin at 1 p.m. Thursday, Nov. 15, in the Little America facility on the edge of Cheyenne. END_OF_DOCUMENT_TOKEN_TO_BE_REPLACED

“According to the most recent Quarterly Hogs and Pigs report in September, there were 75.5 million hogs and pigs in the United States,” said Bill Meyer, Director, Mountain Regional Field Office. “The December survey and
resulting report will continue to provide important indicators for the industry of what changes are occurring, if any.” END_OF_DOCUMENT_TOKEN_TO_BE_REPLACED

Listen to the interview with CO Agriculture Commissioner Don Brown below…

Farmers and Ranchers Have a Voice in Local Farm Program Decisions

“County committee members represent the farmers, ranchers and foresters in our Colorado communities,” said Navarro. “Producers elected to these committees have always played a vital role in local agricultural decisions. It is a valued partnership that helps us better understand the needs of the farmers and ranchers we serve.”

END_OF_DOCUMENT_TOKEN_TO_BE_REPLACED

DES MOINES, IOWA – Nov. 1, 2018 – In celebration of global One Health Day on Nov. 3, America’s pig farmers will reaffirm their commitment to use antimicrobials responsibly as they do their part to reduce antibiotic resistance. This action supports producers’ core values of continuous improvement and doing what’s right for the health of people, pigs and the planet.

“Every day, U.S. pig farmers work diligently to ensure their animal’s health and well-being while embracing environmental stewardship to mutually benefit all,” said National Pork Board President Steve Rommereim, a pig farmer from Alcester, South Dakota. “One Health Day is a good opportunity to share with the public that we are committed to using antibiotics responsibly and to doing our part to reduce the risk of antimicrobial resistance.”

END_OF_DOCUMENT_TOKEN_TO_BE_REPLACED

Steel and aluminum tariffs by the U.S. will hurt agriculture more than NAFTA 2.0 will help. The updated North American Free Trade Agreement, known as the U.S.-Mexico-Canada Agreement, would grow U.S. agricultural exports by $450 million a year, according to the Farm Foundation. However, the organization says the retaliatory tariffs in response to the tariffs that President Donald Trump has imposed on steel and aluminum will cause U.S. exports to Mexico and Canada to decline by $1.8 billion. Those figures were presented in an analysis by Perdue University Wednesday. The report says, according to the Hagstrom Report, that with continued retaliatory tariffs from China and other trading partners, “the United States would see a decline in agricultural exports of $7.9 billion, thus overwhelming the small positive gains from USMCA.” However, those close to the Trump administration expect the steel and aluminum tariffs will be removed at a later date, before the USMCA is put into effect.

Vietnam is emerging as the winner of the U.S.-China trade war. A new analysis by the American Chamber of Commerce in South China shows companies in China and the U.S. are losing market share, especially to companies from Vietnam, as a result of the trade war. Companies in China also report they are losing sales to companies from India, the U.S. and South Korea. For U.S. companies, the next rivals taking market share are Germany and Japan. The tariff situation could get worse if the Trump administration moves ahead with more tariffs in December against China, pending the outcome of talks at the G20 summit. U.S. soybean farmers or feeling the brunt of the trade war as China has steep tariffs on U.S. soybeans, and other agricultural products. President Trump said last week that the effort would take time, indicating no immediate end to the action.

The Trump administration will hold a hearing in December to help craft negotiating objectives for a trade deal between the U.S. and Japan. A recent Federal Register notice seeks public comment with a deadline of November 26th, and a hearing scheduled for December 10th in Washington, DC. The U.S. Trade Representative’s Office is seeking the comments to develop U.S. negotiating positions. USTR specifically is seeking comments on product-specific negotiating objectives, trade barriers, economics, sanitary and phytosanitary measures, and on measures or practices that undermine fair market opportunities for U.S. businesses, workers, farmers, and ranchers that should be addressed in the negotiations. Japan has previously sought to enter a trade agreement through other means, instead of a bilateral agreement, in an effort to protect its agriculture industry from United States agriculture.

The Trans-Pacific-Partnership replacement that does not include the United States will take effect at the end of this year. Australia and Canada filed ratification documents this week for the Comprehensive and Progressive Agreement for Trans-Pacific Partnership, kicking off a 60-day waiting period before the agreement takes effect, as now six countries have ratified the deal. President Donald Trump removed the U.S. from the agreement upon taking office, opening a new era of trade policy for the U.S. focusing on bilateral agreements and aggressive negotiations. The Wall Street Journal reports backers of the agreement say it may be the most important trade agreement reached in more than two decades, modernizing agreements to reflect the rise of digital trade, services and copyright in a fast-growing region. The trade deal puts U.S. agriculture at a competitive disadvantage as it phases out ties on sensitive products such as agricultural imports in countries including Japan and Mexico.

Fixed 5G wireless is an unlikely candidate to solve rural America’s broadband challenges, according to a new report by CoBank. Rural telecommunication providers have identified 5G fixed wireless as a potential option. However, the report says high costs, competition, spectrum propagation and ecosystem headwinds stand in the way. Verizon is implementing 5G in urban markets, but a CoBank spokesperson says “they are facing operational and technical issues that will limit the scale of its 5G fixed wireless deployments.” Because of the technical issues, CoBank says “we don’t see the use of millimeter-wave spectrum in fixed wireless networks extending to rural markets.” There are measures underway that will open opportunities for some rural network deployments. However, uncertainties related to the cost of acquiring licensed rights could be problematic. Further, the report says that Verizon, the leader in 5G fixed wireless, faces stiff competition from cable operators in urban and suburban areas, which presents a challenge to offer a competitively priced product while maintaining profitability.

The Department of Agriculture is investing $39.6 million for 128 projects to increase access to job training, educational and health care services in rural areas. Announced by Agriculture Secretary Sonny Perdue, the grants stem from the Distance Learning and Telemedicine Grant Program. More than 4.5 million residents in 40 states and three territories will benefit from the funding. Perdue says distance learning and telemedicine technology “bridges the gap that often exists between rural communities and essential education, workforce training and health care resources.” The assistance supports infrastructure improvements, business development, housing, community facilities such as schools, public safety and healthcare, and high-speed internet access in rural areas. For more information and a list of projects, visit www.rd.usda.gov.