USAHA: “Veterinary Students – We Need YOU!”

Veterinary students at the U.S. Animal Health Association (USAHA) annual meeting in Kansas City, Mo., heard a clear message at the student  luncheon held on Saturday: The profession needs young people, and those who enter the field have unlimited opportunities. The luncheon is co-sponsored by USAHA and the American Association of Veterinary Laboratory Diagnosticians (AAVLD).

A few of the people attending the student luncheon at the USAHA annual meeting on Saturday.

The luncheon for students began seven or eight years ago, with just four students. This year, more than 60 eager, interested young people filled the room, along with industry professionals who openly shared their knowledge with students.

Amanda Anderson, a first-year student in the College of Veterinary Medicine at Iowa State University, from Algona, Iowa, says she’s “always wanted to be a vet.” Her dad was a veterinarian so Amanda spent lots of time riding with him as he called on farmers and took care of animals.

Juli Henderson from Wisconsin was looking at wildlife management but decided to pursue a degree in veterinary medicine instead. Aislinn Ophoff, a second-year vet student from Hudson, Wisconsin, grew up in a household focused on human health: Her brother is about to graduate from med school, her mom is a nurse and her dad works for Abbott doing cardiac research. She and Henderson also are students at Iowa State University. 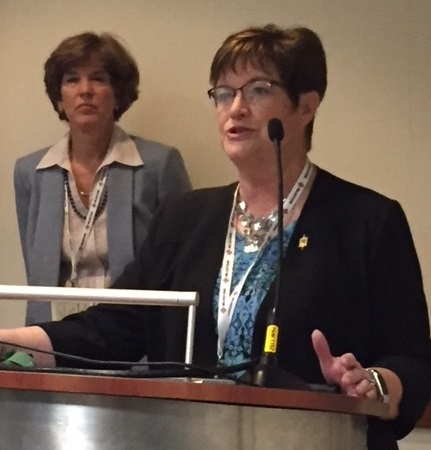 Barb Determan, president of the USAHA from Early, Iowa, welcomes students to the luncheon while Valerie Ragan looks on.

Ragan was obviously pleased with the turnout, and thanked the many state veterinarians who were in the room to visit with students.

Dr. Jack Shere, Deputy Administrator and Chief Veterinary Officer of USDA’s Veterinary Services (VS), told students “the timing is right” for them because so many staff members are nearing retirement.

“Fifty-five percent of my leadership can walk out the door, so we do need you and we’re ready to get you on board,” he says. “You will be the replacements for the people leaving diagnostic labs, government veterinary roles and private practice.”

Shere finished vet school “a few years ago,” he said he used to think going into practice was the only thing a graduate could do, but that’s not the case anymore. Veterinarians can enter many different complementary fields, including government positions.

He’s traveled to all 50 states and many countries during his tenure with USDA, he told students.

“Make yourself useful to the organization you work for, and that organization will work for you,” he said. “You’re just starting and there’s a lot more ahead of you.”

“We need people in the field,” she said, pointing out the many opportunities that are possible on the local, state, national and international level.

USAHA and AAVLD sponsor a number of travel stipends for students to attend the meeting.