Bill Webster is presented with the 2018 Livestock Leader Award by the Department of Animal Sciences at Colorado State University, September 21, 2018

Bill has spent his career dedicated to the innovation and progression of the cattle feeding industry and to strengthening his local community.

“His desire to create efficiencies and improvements within the livestock industry made him well known and very well respected,” said Kevin Pond, head of CSU’s Department of Animal Sciences. “He also worked diligently to strengthen his community and the state of Colorado.”

Livestock producers in Otero and Crowley counties, as well as most of Southeastern Colorado counties are eligible to apply for 2018 Livestock Forage Disaster Program (LFP) benefits on native pasture and improved pasture acres.

LFP provides compensation to eligible livestock producers who suffer grazing losses for covered livestock due to drought on privately owned and cash leased land or fire on federally managed land. Land leased on a AUM basis is in most cases ineligible. END_OF_DOCUMENT_TOKEN_TO_BE_REPLACED

BROOMFIELD, Colo. – On September 28, 2018, the Colorado Department of Agriculture’s, State Veterinarian’s Office, was notified that a second Colorado horse has tested positive for Equine Infectious Anemia (EIA). While both horses reside in Weld County, the two cases are unrelated.
“While the investigation is in its initial stages, it is clear the affected horse is unrelated to horses, locations or movements to the previous case in 2018. The affected horse and other horses on the second Weld County property are subject to a quarantine, which restricts movement of any horses on or off the property. The remaining horses on the facility will be observed, tested and then retested in 60 days,” said State Veterinarian, Dr. Keith Roehr. “It is important to note that the risk of disease transmission to other horses in Colorado at this time is low, due to the fact that there are not any horses housed on adjacent properties, which also lowers the risk of biting horse flies in the area.”
The positive test was conducted by CDA’s Rocky Mountain Regional Animal Health Laboratory. EIA information is available at http://www.cfsph.iastate.edu/Factsheets/pdfs/equine_infectious_anemia.pdf.
FAQs about Equine Infectious Anemia

END_OF_DOCUMENT_TOKEN_TO_BE_REPLACED 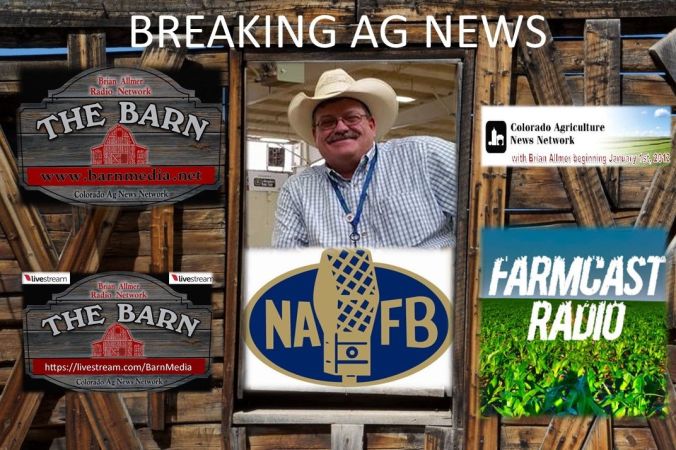 NAFB News Service – September 28, 2018 – House Agriculture Chairman Mike Conaway expressed disappointment regarding the lack of progress on the next farm bill. The House adjourned Friday as the current law was set to expire over the weekend. Conaway says he remains committed to getting the bill done…

September 28, 2018 – The National Corn Growers Association announced the slate of new and returning farmer leaders who will serve as members of the organization’s action teams and committees for the next fiscal year, which begins Monday, October 1. As representatives of their 300,000 fellow American family corn farmers, these volunteers will guide NCGA programs to meet the organization’s short-term strategic goals in order to ultimately fulfill NCGA’s noble vision for U.S. corn: to sustainably feed and fuel a growing world.
“While the year ahead will offer many challenges and opportunities, I am certain that the teams and committees of family corn farmers we have assembled will be both capable and wise in their leadership,” said NCGA FY 2019 President Lynn Chrisp, a corn farmer from Nebraska. “The men and women who volunteer to lead will provide excellent insight that will guide us into a bright future for corn farmers and all of humankind. NCGA received applications from over 150 highly-qualified candidates, with a wide spectrum of talents and life experiences, and we strongly urge all aspiring farmer leaders to continue serving their local and state organizations and seek to build additional leadership skills to better serve their fellow corn farmers nationwide in the future, as NCGA action team and committee members.”
Leadership for NCGA’s nine major teams in FY 2019 are:
Leadership for NCGA’s standing committees in FY 2019 are:
Lynn Chrisp will serve as president and also as NCGA’s delegate to the U.S. Grains Council. Kevin Ross of Iowa will serve as first vice president and, in this capacity, will chair the Resolutions Committee. Kevin Skunes of North Dakota will serve as chair and, in this capacity, will also chair the Nominating Committee.
On October 1, FY 2018 chairman Wesley Spurlock of Texas will retire from the Corn Board but will continue his service to his fellow corn farmers as the co-chair of the Commodity Classic Joint Venture Committee for 2019. Keith Alverson of South Dakota and Anthony Bush of Ohio will also retire from the board at that time.
Click here for a full list of teams and members. The FY 2019 action teams and committees will have their first set of meetings in St. Louis in mid-December.

END_OF_DOCUMENT_TOKEN_TO_BE_REPLACED

Written and submitted by: Rf Meyer

The Colorado State University Crops testing team has planted the 2019 wheat variety test on the Michael Hinkhouse farm.  The test site is located ½ mile south of Burlington along highway 385.   The site is testing hundreds of wheat varieties.  In addition, a number of experimental varieties are also being researched at this site.  The team is also tracking environmental information with a remote weather station installed at this location.   END_OF_DOCUMENT_TOKEN_TO_BE_REPLACED

Bloomberg says the Trump Administration will release the text of a bilateral trade agreement with Mexico on Friday. While the text will likely exclude Canada, it will leave open the possibility of Canada joining the agreement later. U.S. trade law says the text of the deal has to be published 60 days before it can be signed. U.S. Trade Representative Robert Lighthizer says the U.S. is moving forward with the Mexican agreement so the current president can sign it before he leaves office on December 1st. Canada is currently negotiating with the U.S. to join the pact but there are still several issues the two countries haven’t reached an agreement on. Lighthizer says the U.S. doesn’t want to risk having to renegotiate the pact with the incoming president of Mexico. “It wouldn’t be fair to the people involved, certainly U.S. workers, farmers, and ranchers, to start a new negotiation with a new president of Mexico,” says Lighthizer. Trade talks will continue with Canada, even after the deadline passes on Sunday. Lighthizer says the two countries may even carve out a separate deal.

Three state representatives are asking U.S. Trade Representative Robert Lighthizer to slow down the pace of the North American Free Trade Agreement negotiations. They feel that gives the U.S. the best opportunity to come to a fair agreement on dairy exports. Representatives from Wisconsin, Washington, and New York all represent states that need open-market access to Canada in order to support their dairy exports. Milk Business Dot Com says there hasn’t been any substantial progress in accessing the Canadian dairy market or dismantling their Class 7 pricing system. Wisconsin and New York dairy farmers were hit the hardest when Canada implemented its Class 7 milk pricing system in the spring of 2017. As dairy prices across the U.S. remain low, the three representatives say their farmers are depending on access to the Canadian market in order to sell their “world-class dairy products.” In their statement, the legislators say, “We urge Ambassador Lighthizer to stop rushing the NAFTA negotiation process and focus on getting the best deal with both Canada and Mexico.” They add the arbitrary deadlines the administration says it faces are its own. “We should not be rushed to complete NAFTA negotiations at the expense of a good outcome,” they say.

The current farm bill is set to expire on Sunday. Top lawmakers now admit they will likely have to finish putting together a new farm bill after the November 6th midterm election. Politico says the timing isn’t surprising to most observers. There’s been a lot more sniping between House and Senate negotiators than there have been signs of progress over the past month. Failure to meet the September 30th deadline is a defeat for ag leaders who said they were determined to finish a new farm bill before the current one expired in order to give needed certainty to farmers and ranchers. Senate Ag Chair Pat Roberts says he hopes negotiations will make enough progress to vote on a final farm bill the week after the election. However, political leverage could shift significantly if Republicans lose control of the House and Senate. Some members of the farm bill conference committee are warning that waiting until November will add a whole lot more challenges to the negotiations. North Dakota Senator Heidi Heitkamp says there “may not be the political will to get it done” after the midterms. Not a single farm bill title had been finalized through the middle of this week.

Three sources familiar with the discussion told Reuters that the Trump Administration is considering limits on trading biofuels credits. The goal would be to discourage speculation and reduce costs for oil refiners to comply with U.S. biofuels policy. The sources also told Reuters that an announcement could be made in the weeks ahead. The move would be part of a deal to help U.S. corn farmers and biofuels producers by lifting a ban on the summer sales of higher ethanol blends in the nation’s gasoline. President Trump has repeatedly said he supports the lifting the ban on the year-round sale of E15 to help expand the market for corn. However, lifting the ban could also draw legal challenges from the oil industry, which worries that such a move could eat into their market share. The White House is considering capping the number of credits a dealer can hold at 120 percent of their company’s annual compliance obligation. It’s also considering restricting certain parties from holding the credits for more than 30 days.

A broad coalition of groups, including the American Farm Bureau Federation, asked a Georgia federal district court to expand a prior order delaying WOTUS implementation. The groups asked the U.S. District Court in southern Georgia to extend its previous injunction to the 22 states that are currently subject to the “controversial and unlawful” rule. The filing was prompted by another court’s decision to strike down an Environmental Protection Agency rule that delayed application of the Waters of the U.S. Rule. In addition to the Georgia court, federal courts in North Dakota and Texas have blocked the WOTUS rule in specific states. The combined court decisions left only 22 states subject to the 2015 rule. If the Georgia court should grant the groups’ request, the WOTUS rule would be blocked from implementation in all 50 states. The court filing says one of the many problems with the rule is the “hodgepodge” of states in which the federal rule is applicable. “This is a deeply troubling state of affairs,” the motion says. “A rule this fundamental to the Clean Water Act’s regulatory scheme should not apply in a patchwork manner.”

The National Milk Producers Federation welcomes the Food and Drug Administration’s request for public comments on dairy foods labeling. NMPF CEO and President Jim Mulhern says this group is hopeful that this will finally end the misleading practices of plant-based foods imitating real dairy products. The organization will provide additional perspective in explaining why the agency must enforce its own labeling regulations and limit the standardized use of dairy terms to products that come from animals. “We are pleased that after years of engagement, the FDA has finally acting on our concerns that these plant-based products are inappropriately marketed to consumers,” Mulhern says. “Plant-based products are packaged, merchandized, and sold in the same way as real dairy foods. However, they provide fewer nutrients and therefore cannot be considered suitable substitutes.” The concern over accurate labeling is a concern not just about nutritional equivalence and public health. Mulhern says a food identified by a certain standard is more than just a collection of nutrients. “Just adding plant protein, calcium, and a few other ingredients doesn’t make it milk,” Mulhern says.