(The BARN / FarmCast Radio – Briggsdale, CO) September 24, 2018 – Joining the Colorado Ag News Network and FarmCast Radio here inside The BARN is Bobbi Ketels, Executive Director for the Colorado Association of Conservation Districts and we’ll be discussing several topics including:

To learn more about the Colorado Association of Conservation Districts visit http://www.coloradoacd.org

Take a look at the DRAFT Agenda

All election information can be found at www.weldvotes.com.  We have posted the Blue Book, TABOR Notice and sample ballot to our website.  We encourage everyone to look over our webpage as this will be our main means of communication along with the Clerk and Recorders Facebook page– Carly Koppes Weld Clerk and Recorder.  We ask for your help to encourage the voters to return their voted ballots early to have more accurate early election night results.

Colorado State University’s Departments of Animal Science and Soil & Crop Sciences will be hosting a beef cattle field day and pasture school at ARDEC in Fort Collins, Colorado, October 4-5, 2018. It will feature an update and tour of the CSU pivot grazing project, experienced faculty and producers discussing grazing strategies, and a hands-on workshop to improve your grazing management skills. 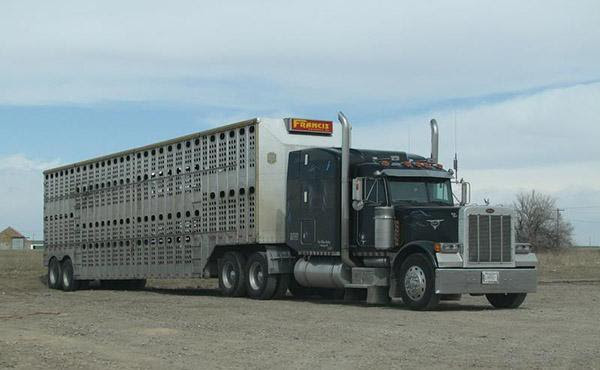 The upcoming Advanced Notice of Proposed Rulemaking (ANPRM), which will be published in the Federal Register, responds to widespread Congressional, industry, and citizen concerns and seeks feedback from the public to determine if HOS revisions may alleviate unnecessary burdens placed on drivers while maintaining safety on our nation’s highways and roads.  The comment period will be open for 30 days.

The four specific areas under consideration for revision are: END_OF_DOCUMENT_TOKEN_TO_BE_REPLACED

Dr. Delbert “Del” Miles, a feedlot veterinarian from Greeley, Colorado, last week was recognized for his dedication to the health and well-being of cattle at the 2018 American Association of Bovine Practitioners (AABP) Annual Conference in…

The Environmental Protection Agency released aggregated information on small-refinery exemptions to the Renewable Fuels Standard the agency issued over the last couple of years. A DTN report says they’ve also given out information on current and future waiver requests. The agency says it granted 49 waivers in 2016 and 2017. Those waivers added up to 2.25 billion gallons in biofuels, which negatively affected roughly 800 million bushels of corn demand. Because of those waivers, the National Biodiesel Board says that amounted to a loss of 300 million gallons of biofuels. In a statement issued last week, Acting EPA Administrator Andrew Wheeler says, “Increasing transparency will improve implementation of the RFS and provide stakeholders and the regulated community with the certainty and clarity they need to make important business and compliance decisions.” Ag Secretary Sonny Perdue says he hopes making this information public will be beneficial for both the biofuels and agriculture markets. EPA says it will also post the latest Renewable Identification Numbers (RIN) weekly average prices as well as the volume of RINs sold. Growth Energy CEO Emily Skor says her group still has questions about how the EPA will resolve the issue of the lost gallons of biofuels.

White House Economic Trade Adviser Kevin Hassett says the U.S. is getting very close to having to move forward on its trade deal with Mexico without Canada. The deadline to publish the text of an agreement to update the North American Free Trade Agreement is October first. As the deadline approaches, Hassett says the U.S. and Canada haven’t agreed to a deal. “We’re still talking to Canada,” Hassett says, “but we’re getting very, very close to the deadline where we’re going to have to move ahead with Mexico all by itself.” Hassett, who chairs the White House Council of Economic Advisers, says he’s surprised that Canada hasn’t signed an agreement yet. “I worry that politics is trumping common sense because there’s a very good deal in place that was designed by both Mexico and the U.S. to appeal to Canada,” he says. “They’re not signing on to the deal and its got everyone puzzled.” Chrystia Freeland, Canada’s Foreign Minister, left Washington last Thursday with no deal in place.

U.S. Supplying More Than Half of the E.U. Soybeans

The European Commission released a report that says American farmers are now supplying more than half of the European Union’s soybeans. Over a 12-week period from July through mid-September, U.S. soy exports to the EU were 133 percent higher than the same time period in 2017. Politico says the U.S. supplied 25 percent of the EU’s soybeans needs from July through mid-September in 2017, with that number growing to 52 percent of the EU’s soybeans in 2018. While the increase in soybean exports does provide some relief to American farmers, it still can’t replace all of the lost soybean sales to China. The U.S. exported roughly $587 million worth of soybeans to Europe during that 12-week period, which calculates out to $2.5 billion on an annual basis. China bought $12.3 billion worth of U.S. soybeans in 2017. That’s 60 percent of all U.S. soybean exports. As farmers know firsthand, those sales have dried up since China imposed a 25 percent retaliatory tariff on American soybeans, as well as a host of other U.S. ag exports in July. The E.U. figures show that U.S. farmers have replaced Brazil as the top supplier for Europe. That comes as Brazil has replaced the U.S. as the top soybean supplier to China.

Bayer is increasing efforts to defend Roundup, its flagship weed killer. A Dow Jones report says the effort follows a recent verdict in a California court case alleging that the chemical causes cancer sent shares sharply lower. According to the company’s court filing, Bayer wants a California judge to overturn the jury verdict, order a new trial, or reduce the damages. The company is looking to overturn a $289 million-dollar jury award in August. It’s the first of thousands of cases filed by farmers, gardeners, and others who claim Bayer’s Roundup herbicide caused their cancer. The jury reached a unanimous verdict in awarding the damage amount to a California groundskeeper who claimed that frequent use of Roundup caused his non-Hodgkin’s lymphoma. The verdict came just two months after Bayer completed its acquisition of Monsanto, who invented the herbicide. Bayer shares have fallen 22 percent to record-lows that haven’t been seen in five years. The Dow Jones report says business insiders are questioning whether Bayer underestimated the risks of acquiring Monsanto because of the pending lawsuits. Bayer now faces 8,700 plaintiffs in the U.S. alone, a number the company expects will only get larger.

Organizations that use government funds to promote U.S. commodity purchases in foreign countries could face some funding challenges in the near future. The Hagstrom Report says that will likely happen if Congress doesn’t pass a farm bill by September 30. Scott Shearer is a lobbyist who represents the FMD groups, which are called cooperators. “In this time of trade uncertainty and low prices, lack of funding, which likely leads to closing offices and letting staff go is a signal to our competitors that we’re ceding the market to you,” says Shearer. That situation also would complicate the Trump Administration’s plans to help farmers hurt by retaliatory tariffs through the increase of trade promotion programs. The potential funding gap happens because the Congressional Budget Office says programs that are under $50 million go to a zero baseline in their last year of authorization. Only a new farm bill can solve that problem. Shearer says an extension of the 2014 farm bill won’t help. In past years, USDA has issued new allocations of funds in November. However, the agency can’t provide more money until Congress acts on a new farm bill.

A Rabobank report says a historic drop in poultry exports from Brazil is shaking up trade in the commodity around the world. The latest quarterly outlook on the industry says African Swine Fever could also indirectly affect the industry. Global poultry prices dropped by an average of five to 10 percent in the second quarter of this year. African Swine Fever outbreaks in China may lead to an increase in pork supply because of herd liquidation through the end of the year. That may push all meat prices lower in the months ahead. Analysts in the report say that drop could reverse by 2019. “Chinese consumers may turn from pork to poultry and push prices somewhat higher,” the report says. “While this can paint a pessimistic picture, in reality, the poultry industry performance is still solid around the world.” In the U.S., Rabobank says prices are weakening and margins are going to be soft as protein supplies rise. The industry is still profitable, as it’s being helped by growing exports to Cuba, Taiwan, and Vietnam. Overseas, Rabobank says local poultry industries in Asia, Africa, and Europe are all enjoying profitable margins thanks to balanced supply and demand.