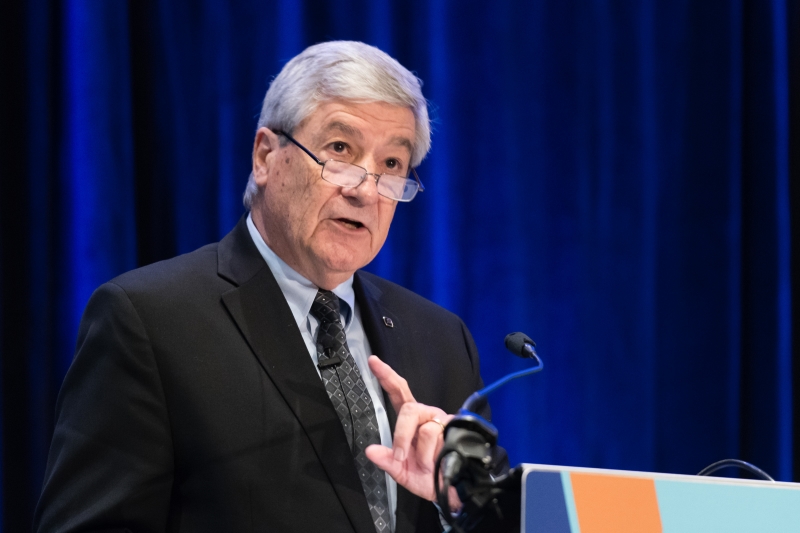 Jim Stitzlein, manager of market development for Consolidated Grain and Barge Co., was elected chairman of the U.S. Grains Council at its 58th Annual Board of Delegates Meeting on Wednesday.

Denver – Delegates of the U.S. Grains Council (USGC) elected as chairman Jim Stitzlein, manager of market development for Consolidated Grain and Barge Co., at its 58th Annual Board of Delegates Meeting on Wednesday.

Stitzlein unveiled his chairman’s theme during the final general session: “When Trade Works, the World Wins.

“The diversity of the U.S. Grains Council is key to the work it does,” Stitzlein said. “From farmers to traders and agribusinesses, each role is important in the Council’s mission of developing markets, enabling trade and improving lives.

“Working with those diverse perspectives within the global trade market is one way to encourage effective and efficient trade in both supply and price for international customers, steady growth in world markets and political stability throughout the world.”

Stitzlein has more than 40 years of experience in the commodity grain handling and export business, including local origination programs; hedging and merchandising; transportation, logistics and facility management; and export trading and documentation.

Involved with the Council for more than 20 years, Stitzlein has traveled extensively for the organization, is active in the National Grain and Feed Association (NGFA), from which he received the NGFA Distinguished Service Award, and has broadly participated in other activities related to quality and biotechnology as they impact the grain trade.

Stitzlein grew up working on his family farm in Ohio where he was active in 4-H and FFA. He earned both a bachelor’s and master’s degrees in agricultural economics from Ohio State University.

In addition to Stitzlein’s ascendency, the Council’s delegates elected Jim Raben from the Illinois Corn Marketing Board as secretary/treasurer, sector directors and three at-large directors.

The Board of Directors now includes:

The new Board of Directors seated Wednesday will serve until July 2019.

The Council’s summer meeting has been ongoing since Monday, featuring general sessions focused on the emerging trade policy landscape, meetings of the organization’s Advisory Teams and sessions of membership sectors.

More from the Denver meeting is available here, here and on social media, using the hashtag #grains18.