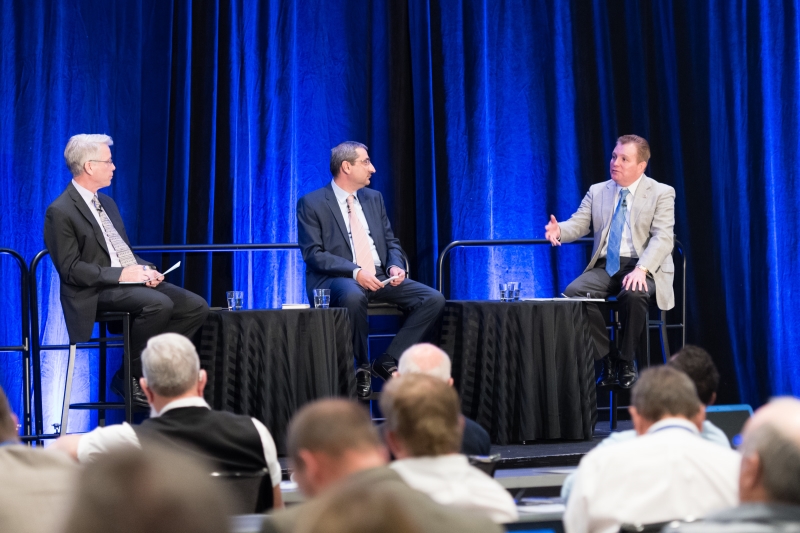 Shultz, Taieb and Cordero speak about the Middle East’s demand for U.S. grains products at a panel in Denver.

Denver – In a global trade environment challenged by tariffs and tensions, emerging markets for grains and ethanol provided a bright spot for U.S. farmers, agribusinesses and industry officials at the U.S. Grains Council’s 58th Annual Board of Delegates meeting in Denver. END_OF_DOCUMENT_TOKEN_TO_BE_REPLACED

WASHINGTON – In a letter sent today to congressional leadership, National Farmers Union (NFU) President Roger Johnson emphasized the need to address agricultural economic hardships in the 2018 Farm Bill. The NFU Board of Directors unanimously approved the motion to send this letter during a meeting held Monday afternoon.
073118_NFU-Trade-Letter1
END_OF_DOCUMENT_TOKEN_TO_BE_REPLACED

Washington, D.C. – At last week’s Senate Agriculture Committee hearing, Colorado U.S. Senator Michael Bennet invited fellow Coloradan Jim Hubbard—if confirmed as Undersecretary for Natural Resources and Environment at the USDA—to travel to Colorado to discuss the next steps for the Forest Service. Hubbard has since replied that he would be “happy to meet in Colorado for the discussion.”

“In Colorado, our expanding outdoor economy, paired with the increasing challenge of climate change, make it all the more important to have solution-oriented leaders at USDA like Jim Hubbard,” Bennet said. “We’re looking forward to welcoming Mr. Hubbard back to Colorado as the Forest Service prioritizes new projects to safeguard the health of our forests and watersheds.”

END_OF_DOCUMENT_TOKEN_TO_BE_REPLACED

The aid package announced to offset harm by the Trump administration’s trade policy for agriculture could be ready to go by October, according to Agriculture Secretary Sonny Perdue. While in Argentina as part of the G20 meeting of agriculture ministers, Perdue told Reuters the aid package could have payments reaching farmers by late September. The plan would include between $7 billion and $8 billion in direct cash relief as the Department of Agriculture expects U.S. farmers to take an $11 billion hit due to retaliatory tariffs after Washington placed duties on Chinese goods. However, Perdue cautioned: “Obviously this is not going to make farmers whole.” Checks will go out to farmers “as soon as they prove their yields,” according to Perdue, who says the yields will be based on actual production, not historical averages. The program is a response to trade tariffs implemented on U.S. agriculture goods for the 2018 crop year only, as Perdue says “we do not expect to do this over a period of time.”

Providing aid to industries impacted by negative trade policy could cost the nation $39 billion, according to new data by the U.S. Chamber of Commerce. Farmers are expected to receive a $12 billion aid package to lessen the burden of trade disputes by the Trump administration. The U.S. Chamber of Commerce calls farmers and ranchers the “hardest hit” by Trump’s trade policy, suffering deep economic losses. However, agriculture is not alone, and an analysis by the U.S. Chamber found that offering so-called bailouts to all industries affected by trade policies would cost taxpayers $39 million. The Chamber says the administration’s focus should be expanding free trade and removing harmful tariffs, “not allocating taxpayer’s money to only marginally ease the suffering” for some of the industries feeling the pain of the trade war. Farmers and ranchers in unison have told the Trump administration they want trade, not aid.

The U.S. and Mexico are nearing an agreement on the trade of automobiles as part of the North American Free Trade Agreement renegotiation effort. Politico reports the U.S. and Mexico are in the “final stages” of reaching a deal on the automotive rules of origin section of NAFTA, key to completing the renegotiation. A team of negotiators is in Washington, D.C. this week to continue the talks. However, other issues within the negotiations, including a sunset provision and dispute settlement, along with dairy trade, remain unsettled. President Trump has leaned towards striking a deal with Mexico first, before moving on to hashing out details with Canada. However, officials from Canada and Mexico agree that any final deal would be trilateral between the three nations. U.S. Trade Representative Robert Lighthizer said last week that finishing the talks with Mexico could put pressure on Canada to reach an agreement. Scrapping Canada’s dairy supply management system, a goal for the U.S. as part of the negotiations, remains “unacceptable,” according to trade officials from Canada.

A letter from the Freedom Partners is urging the President to rejoin the Trans-Pacific Partnership, now known as the Comprehensive and Progressive Agreement for Trans-Pacific Partnership. Freedom Partners started in 2011 to promote the benefits of free markets and a free society. The group launched an advertising campaign this week against President Trump’s trade policy and ongoing trade war with China, that is expected to cost farmers and ranchers $11 billion. In a corresponding letter, the group said “we must join them,” referring to nations that are “not waiting for us,” and signing trade deals to eliminate tariffs. The organization calls the new TPP agreement one that includes better standards for trade and significantly lowered tariffs. Once in full effect, the group alleges that the agreement will put American businesses at a distinct competitive disadvantage and will increase trade losses to other countries.

The National Corn Growers Association “Good Steward” nomination deadline is fast approaching, Monday, August 6th. NCGA is asking for nominations of someone who is “doing a stellar job on their farm of demonstrating the economic and conservation value of soil management.” This year anyone can nominate a candidate for recognition if they are a corn grower member of the association. NCGA affiliate states and organizational partners may also submit nominations. One recipient will be selected from a field of nominees submitted by NCGA state affiliates and other corn industry and organizational partners. Nomination forms must be completed jointly by the nominating party and the nominee and will be processed through NCGA. Selection of the Good Steward Recognition will be made by experts in the field of agricultural conservation, environment and sustainability. The announcement of the recipient will be made at Commodity Classic in Orlando, Florida, next year.